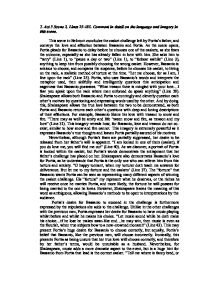 7. Act 3 Scene 2, Lines 25-185. Comment in detail on the language and imagery in this scene. This scene in Belmont concludes the casket challenge left by Portia's father, and conveys the love and affection between Bassanio and Portia. As the scene opens, Portia pleads for Bassanio to delay before he chooses one of the caskets, as she fears the outcome, especially as she has already fallen in love with him. She asks him to "tarry" (Line 1), to "pause a day or two" (Line 1), to "forbear awhile" (Line 3), anything to keep him from possibly choosing the wrong casket. However, Bassanio is anxious to choose, and compares the suspense, before he chooses his casket, to living on the rack, a realistic method of torture at the time. "Let me choose, for as I am, I live upon the rack" (Line 25). Portia, who uses Bassanio's words and interprets the metaphor used, then skilfully and intelligently questions this anticipation and eagerness that Bassanio possesses. "What treason there is mingled with your love...I fear you speak upon the rack where men enforced do speak anything" (Line 28). Shakespeare allows both Bassanio and Portia to cunningly and cleverly question each other's motives by questioning and expressing words used by the other. ...read more.

This may present Portia's huge desire for Bassanio to choose correctly, but equally, Portia's belief that Bassanio, like the previous men, will choose incorrectly. Ironically, this presents Portia as being unsure that her true love will choose correctly, and therefore by her father's terms, would be unsuitable as a husband. Nevertheless, for Shakespeare, music adds a more dramatic aspect to the event, but is a huge hint for Bassanio from Portia that lead is the correct casket. "Tell me where is fancy bred, or in the heart or in the head? How begot, how nourished?" (Line 63). Most apparent from this song is that both "bred" and "head" rhyme with the correct casket; lead. Also, the song's lyrics encourage or warn Bassanio not to judge by external appearances, and therefore reject the silver and gold caskets. Additionally, the second verse of the song includes lyrics such as "it is engendered in the eyes, with gazing fed, and fancy dies". This also encourages Bassanio that love in the eyes is not ever lasting, which again, implies the correct choice is lead. Shakespeare uses the words in the song to show Bassanio as well as his audience, that lead is the correct choice, which also expresses the Portia's desire for Bassanio to choose correctly. ...read more.

"Yet look how far the substance of my praise doth wrong this shadow in underprizing it, so far this shadow doth limp behind the substance" (Line 127). At this point of the scene, Shakespeare presents nothing but the love between Bassanio and Portia, as the play has reached its romantic peak, presenting the long awaited union of Bassanio and Portia. Following the kiss between Bassanio and Portia, Portia commits herself to Bassanio and all she owns to her new husband. She also presents him with a ring, the symbol of their union. Following this symbol, Portia claims that Bassanio is to never "part from, lose, or give away" (Line 173). Bassanio then romantically promises that "when this ring parts from this finger, then parts life from hence: O then be bold to say Bassanio's dead" (Line 183). Both these promises from both Portia and Bassanio present the true love they feel, and are used as symbols by Shakespeare to represent the climax of the love story in the play. At this point of the play, Shakespeare presents the true love between Bassanio and Portia, as well as the love that is expressed in Belmont, the scene of the love story within the play. Shakespeare allows both Portia and Bassanio to express their linguistic skills using deep and descriptive imagery expressing their love and heightening the suspense that the casket challenge brings to the scene. ...read more.