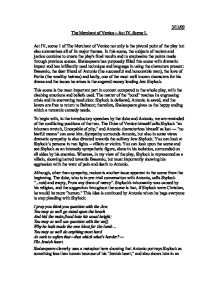 ACt 4 scene 1 of The Merchant Of Venice

3/11/09 The Merchant of Venice - Act IV, Scene 1. Act IV, scene 1 of The Merchant of Venice not only is the pivotal point of the play but also summarises all of its major themes. In this scene, the subjects of racism and justice combine to create the play's final results and to emphasize the points made through previous scenes. Shakespeare has purposely filled this scene with dramatic impact and has brilliantly used technique and language in using the characters present: Bassanio, the dear friend of Antonio (the successful and honourable man), the love of Portia (the wealthy heiress) and lastly, one of the most well known characters for his drama and the issues he arises is the angered money lending Jew Shylock. This scene is the most important part in context compared to the whole play, with the clashing emotions and beliefs used. The matter of the "bond" reaches its engrossing crisis and its enervating resolution: Shylock is defeated, Antonio is saved, and the lovers are free to return to Belmont; therefore, Shakespeare gives us the happy ending which a romantic comedy needs. To begin with, in the introductory speeches by the duke and Antonio, we are reminded of the conflicting positions of the two. The Duke of Venice himself calls Shylock "an inhuman wretch, Uncapable of pity," and Antonio characterizes himself as lost - "no lawful means" can save him. ...read more.

However, in my opinion the character who is most vocal in his racism against Shylock is Gratiano. This is because of his anger and bitterness at Shylock's lack of mercy, Gratiano insults Shylock several times, from "harsh Jew" to "inexecrable dog." He also extends Antonio's comparison between Shylock and a wolf: "Thy currish spirit, Govern'd a wolf...for thy desires, Are wolvish, bloody, starv'd, and ravenous" which causes dramatic thoughts and images of the audience, images of a bloodthirsty monster that will stop at nothing short of murder because of his anger and racism, Gratiano is the only person in the courtroom who urges both the duke and Antonio to have Shylock put to death immediately once the scene is resolved. Likewise to what I mentioned earlier in that the issues brought up in earlier scenes emphasize the points made through previous scenes is completely true because in Act I, scene 3, Shylock has racist opinions as well. We know that from his first entrance into the play, Shylock hates Antonio because he is a Christian, a point which helps to encourage Shylock to revenge. However, mentioning this in court would not be beneficial to Shylock in his suit, which is the reason that he never expresses his racist opinions. Even so, these opinions matter very much in the scene. ...read more.

For half thy wealth, it is Antonio's; The other half comes to the general state, Which humbleness may drive unto a fine The duke pardons Shylock even though Shylock has not asked for his mercy because he has learned Portia's lesson about the importance of mercy. Antonio, however, does not show mercy to Shylock, but instead to his daughter Jessica and her husband Lorenzo. Instead of keeping his half of Shylock's property, he gives it to Lorenzo. He also asks the court to make Shylock convert to Christianity. Antonio, then, does punish Shylock for his disbelief and hateful actions, but does so in a way that assists Jessica and Lorenzo and furthers the Christian theme of the play. The merchant Of Venice is one of Shakespeare's best. Yet the dramatic high point of Act IV scene 1 makes it what it is, one of the most memorable of Shakespeare's work that will never leave you. This is all due to Shakespeare's brilliant writing skills some of which involving the techniques of imagery and dramatic devises but of course most importantly it is all due to the powerful plot which focuses on the feelings of discrimination, righteousness and conflict that not only run a major role in this scene, but in the whole play. Not only run a major role in the Shakespearian time, but in this modern day. ...read more.