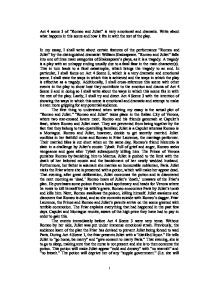 Act 4 scene 3 of &amp;#147;Romeo and Juliet&amp;#148; is very emotional and dramatic. Write about what happens in this scene and how it fits in with the rest of the play.

Act 4 scene 3 of "Romeo and Juliet" is very emotional and dramatic. Write about what happens in this scene and how it fits in with the rest of the play. In my essay, I shall write about certain features of the performance "Romeo and Juliet" by the distinguished dramatist William Shakespeare. "Romeo and Juliet" falls into one of three main categories of Shakespeare's plays, as it is a tragedy. A tragedy is a play with an unhappy ending usually due to a fatal flaw in the main character(s). This in turn leads to a final catastrophe, which brings the tragedy to an end. In particular, I shall focus on Act 4 Scene 3, which is a very dramatic and emotional scene. I shall state the ways in which this is achieved and the ways in which the play is effective as a tragedy. Additionally, I shall cross-reference this scene with other events in the play to show how they contribute to the emotion and drama of Act 4 Scene 3 and in doing so I shall write about the ways in which this scene fits in with the rest of the play. Lastly, I shall try and direct Act 4 Scene 3 with the intention of showing the ways in which this scene is emotional and dramatic and attempt to make it even more gripping for any potential audience. The first thing to understand when writing my essay is the actual plot of "Romeo and Juliet." "Romeo and Juliet" takes place in the Italian City of Verona, where two star-crossed lovers meet. Romeo and his friends gatecrash at Capulet's feast, where Romeo and Juliet meet. They are prevented from being together by the fact that they belong to two quarrelling families; Juliet is a Capulet whereas Romeo is a Montague. Romeo and Juliet, however, decide to get secretly married. Juliet confides in her faithful nurse and Romeo in Friar Laurence, the marriage performer. ...read more.

Juliet feels that she must remain on her own. This scene is made more dramatic because Juliet is in possession of a dagger. She decides that if the plan should go wrong, and she has to marry Paris, the dagger "shall forbid it." - Juliet is prepared to kill herself rather than to commit bigamy and destroy Romeo's trust and loyalty. By now, the seriousness of the circumstances she got herself into has struck her considerably. Juliet starts to feel increasingly nervous and frightened. She begins to question everyone's motive, even the Friar, whom she has never doubted before. Juliet is concerned that the potion is actually a poison which the Friar "subtly hath minister'd" to kill her. She believes this is because if the friar has Juliet killed, he will not have to marry Juliet and Paris since this is bigamy and is therefore against all religious standards. She answers her own question as to whether the friar has given her poison instead of a potion intentionally. She replies "I fear it is." She comforts herself by telling herself that the friar could not do such a thing as he is a "holy man" and he is true to his word. Additionally, Juliet is petrified of the potential dangers she may encounter while imprisoned in the vault. She thinks she could be "stifled", as there is no "healthsome" air to breath and she might "die strangled" before Romeo arrives. Juliet considers two possible scenarios she may face while in the tomb. She thinks that she can either suffocate, or will be scared to death as a result of the "terror of the place." She is also aware that her ancient and "buried ancestors" will be present in the vault and that the vault will be "pack'd." She knows that she will be trapped and crammed into a very small space. This creates a dark image of restriction and isolation. ...read more.

She should say, "How if, when I am laid into the tomb, I wake before the time that Romeo Come to redeem me?" in a slow and nervous fashion. Then, she should say the next few lines progressively getting faster, louder and more passionate. The music should stop now to create a petrifying silence and, the lights should also fade slightly. Again, words like "stifled," "foul," "strangled," "horrible," "conceit" and "terror" should be emphasised as these are very moving words. She should sound distressed as she says "where bloody Tybalt, yet but green in earth" to show that she still cares for her recently deceased cousin. Once more, she should start to get louder and almost hysterical as she talks about the "mandrakes" being "torn out of the earth" and her concern that she may "dash out" her "desperate brains" with her "forefathers' joints." When she imagines seeing Tybalt's ghost, she should move back to imply she is running away from something and she should also put her arm out to suggest she trying to prevent someone from coming towards her. Gradually, she should move back and huddle down on the floor just in front of the bed whilst excitably screaming "stay, Tybalt, stay!" and "Romeo, I come." She should then be frantically trying to open the vial and then as she is getting up, she should drink the potion and fall upon the part of her bed, which is out of view to the audience. Juliet should drop the vial so it lands under the bed to make sure that when she is discovered, the vial is not found and so does not cause any suspicion. The lights should gradually fade to darkness to indicate that the scene had concluded. In conclusion, there are many ways in which "Romeo and Juliet" is emotional and dramatic, especially Act 4 Scene 3. A great deal took place and there are many ways in which this scene fits in with the rest of the play. 1 1 ...read more.