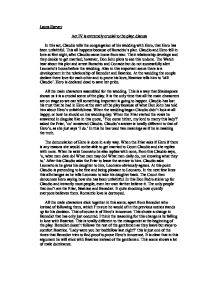 Act IV of &quot;Much Ado About Nothing&quot; is extremely crucial to the play: discuss.

Laura Harvey Act IV is extremely crucial to the play: discuss In this act, Claudio tells the congregation of his wedding with Hero, that Hero has been unfaithful. This all happens because of Borachio's plan. Claudio and Hero fell in love at first sight, after Claudio came home from war. Their relationship develops and they decide to get married; however, Don John plots to see this undone. The Watch hear about this plot and arrest Borachio and Conrade but do not successfully alert Leonarto's house before the wedding. Also in this important scene there is a development in the relationship of Benedict and Beatrice. At the wedding the couple declare there love for each other and to prove his love, Beatrice tells him to 'kill Claudio'. Hero is declared dead to save her pride. All the main characters assembled for the wedding. This is a way that Shakespeare shows us it is a crucial scene of the play. It is the only time that all the main characters are on stage so we can tell something important is going to happen. ...read more.

It quite shocking how quickly everyone believes them. Romantic love is destroyed. All the male characters stick together in this scene, apart from Benedict who instead of following them, which I'm sure he would of in the previous scenes stands up for his decision. This of course is of Hero's innocence. This shows a change in Benedict that has only just occurred. I think the reasoning for this change is he falling in love with Beatrice. This is totally different to the misogamist at the beginning of the play. Benedict doesn't follows the rest of the gentlemen as they leave but stays to comfort Beatrice. 'Lady were you her bedfellow last night?' this is just one of the times that Benedict tries to find proof to prove Hero's innocence. It is clear that in this argument he will stick with Beatrice instead of the gentlemen. This scene shows a lot of male dominance. Beatrice and Benedict, after everyone has left, declare their love for each other. ...read more.

The Watch is then enters to show their evidence. The Watch admit to what they herd Conrade and Borachio talking about previously. When the sexton asks what the Watch herd them say, the first Watch man replies 'And that Count Claudio did not mean upon his words, to disgrace Hero before the assembly, and not marry her.' After more proof Don John's plan is uncovered, this makes the audience think that all is going to be well, a happy ending. We find out more information in this scene that Don John has fled, this shows he has got something to hide. The sexton puts all the truth together then rushes to Leonarto's house with his findings. Within this act, Shakespeare has brought to fruition many of his themes and ideas. We see romantic love denounced alongside love born out of knowledge prospering. He end the first scene on a dramatic note, with the tension of Benedict leaving the stage to kill his best friend, but presents the second scene in a comic way, in order to lighten this tension. Act IV is therefor extremely significant and crucial to the development of the play, 'Much Ado about Nothing'. ...read more.