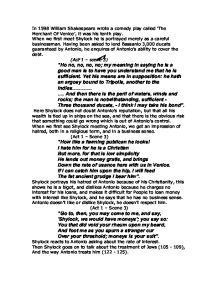 In 1598 William Shakespeare wrote a comedy play called 'The Merchant Of Venice', it was his tenth play. When we first meet Shylock he is portrayed merely as a careful businessman. Having been asked to lend Bassanio 3,000 ducats guaranteed by Antonio, he enquires of Antonio's ability to cover the debt. (Act 1 - scene 3) "Ho no, no, no, no; my meaning in saying he is a good man is to have you understand me that he is sufficient. Yet his means are in supposition: he hath an argosy bound to Tripolis, another to the Indies............ .... And then there is the peril of waters, winds and rocks; the man is notwithstanding, sufficient - Three thousand ducats, - I think I may take his bond". Here Shylock does not doubt Antonio's reputation, but that all his wealth is tied up in ships on the sea, and that there is the obvious risk that something could go wrong which is out of Antonio's control. When we first see Shylock meeting Antonio, we get an impression of hatred, both in a religious term, and in a business sense. ...read more.

This shows him as any normal person wanting payment of a loan. When one of Antonio's friends comes up to Shylock and asks him to be Merciful, Shylock reacts by saying: (Act three - scene 1) "...I am a Jew. Hath a Jew not eyes? Hath not a Jew hands, organs, dimensions, Senses, affections, passions? Fed with the same food, hurt with the same weapons, subject to the same Diseases, healed by the same means, warmed And cooled by the same winter and summer as a Christian is? If you prick us do we not bleed? If you Tickle us, do we not laugh? If you poison us, do we Not die? - And if you wrong us, shall we not want revenge". Shylock is pleading the victim; he is saying this in reply to Salerio's speech (47 & 48), Just because he is a Jew, and why should the deal not go through, just because Antonio does not have the means to pay the debt? Why should he not have his flesh? Shylock up to now has been portrayed as a villain; here Solanio says a quote that gives another insight to Shylocks character (Act 2 scenes 8) ...read more.

(Act 4 - scenes1) "I am content; so he will let me have The other half in use, to render it Upon his death unto the gentleman That lately stole his daughter. Two things provided more, - that for this favor, He presently become a Christian; The other that he do a recorded gift, Here in the court, of all he dies possessed Unto his son Lorenzo and his daughter." I have come to the conclusion that Shakespeare portrayed Shylock as a complex character, at first he was portrayed as a careful businessman, and as the play proceeded he was a victim of his own greed and misfortune. His daughter left him, and took a lot of his jewels and money, and then he went to court to get his flesh, he was not only confronted by a biased lawyer, but also told that he must either die, or convert to Christian, and was told to make a will in front of the court, which states that he must, when he dies, give half of his money to his daughter Jessica and Lorenzo, and the other half to the state of Venice. ...read more.