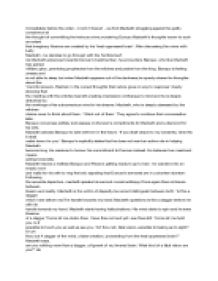 Transfer-Encoding: chunked ﻿Immediately before the order , in Act 2 Scene1 , we find Macbeth struggling against his guilty conscience at the thought of committing the heinous crime,murdering Duncan.Macbeth?s thoughts waver to such an extent that imaginary illusions are created by his ?heat oppressed brain?. After discussing the crime with Lady Macbeth , he decides to go through with the ?terrible feat?. As Macbeth advances towards Duncan?s bedchamber, he encounters Banquo, who like Macbeth has gained military glory, promising prophecies from the witches and praise from the king. Banquo is feeling uneasy and is not able to sleep but when Macbeth appears out of the darkness,he openly shares his thoughts about the ?merciful powers, Restrain in the cursed thoughts that nature gives in way to response? clearly showing that the meeting with the witches has left a lasting impression on Banquo?s mind and he is deeply disturbed by the workings of his subconscious mind in his dreams. Macbeth, who is deeply obsessed by the witches claims never to think about them. ...read more.

As which now I draw.? Macbeth says that this whimsical dagger bears resemblance to the real dagger, which he pulls out. ? Thou marshall?st me the way that i was going, And such an instrument I was to use. Mine eyes are made fools o?th other senses, Or else worth all the rest.? Macbeth says the phantom dagger steers him towards the place he was already going to, Duncan?s chamber. He is shocked to see that he was about to use a dagger just like this one to commit the murder. He feels that his eyesight is either the only working one or the one sense that is not working. He fears that his eyesight is being made a mockery of. ?I see thee, still And on thy blade dudgeon gouts of blood, which was not so before.? Macbeth implys that the daggers appearance has changed. Now is covered with ?dudgeon gouts of blood.? Macbeth suddenly sees that the dagger is covered with blood splotches. ...read more.