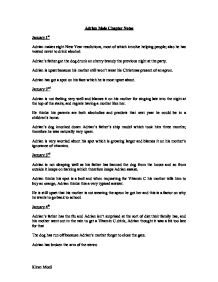 Adrian Mole Chapter Notes January 1st Adrian makes eight New Year resolutions, most of which involve helping people; also he has vowed never to drink alcohol. Adrian's father got the dog drunk on cherry brandy the previous night at the party. Adrian is upset because his mother still won't wear his Christmas present of an apron. Adrian has got a spot on his face which he is most upset about. January 2nd Adrian is not feeling very well and blames it on his mother for singing late into the night at the top of the stairs, and regrets having a mother like her. He thinks his parents are both alcoholics and predicts that next year he could be in a children's home. Adrian's dog knocked down Adrian's father's ship model which took him three months; therefore he was naturally very upset. Adrian is very worried about his spot which is growing larger and blames it on his mother's ignorance of vitamins. January 3rd Adrian is not sleeping well as his father has banned the dog from the house and so from outside it keeps on barking which therefore keeps Adrian awake. Adrian thinks his spot is a boil and when requesting for Vitamin C his mother tells him to buy an orange, Adrian thinks this a very typical answer. He is still upset that his mother is not wearing the apron he got her and this is a factor on why he wants to go back to school. January 4th Adrian's father has the flu and Adrian isn't surprised at the sort of diet their family has, and his mother went out in the rain to get a Vitamin C drink, Adrian thought it was a bit too late for that The dog has run off because Adrian's mother forget to close the gate. Adrian has broken the arm of the stereo January 5th The dog hasn't yet come back and the house is peaceful, Adrian's mother rang the police and gave a description which didn't really suit it. ...read more.

Bert still hasn't come out of hospital. July 5th Adrian got up a six o'clock in the evening as he was bored because Pandora went to Gymkhana. July 6th Adrian's neighbours are trying to organise a street party in honour of the royal wedding, no one has signed up to help or to come yet. July 7th Bert rang up the National Council for Civil Liberties; they said he could sign himself out of hospital. He is now staying in Adrian's spare bedroom, and driving Adrian's father up the wall. Pandora, Adrian and Bert have signed up for the tea party. Now Bert looks better as he is allowed to smoke. July 8th Bert's snoring is driving Adrian's father mental. Adrian wanting to get out of the house went to school, where he chose the subjects he was doing for his O Levels and CSE's. July 9th School breaks up tomorrow and Pandora is going to Tunisia, Adrian doesn't know how he will survive the separation. July 10th School was excellent, all the teachers seemed to be in really good moods, and even Scruton was seen laughing. Barry Kent was seen hoisting his mother's knickers on to the school flagpole. One of Adrian's neighbour's son is turning nineteen and Adrian is invited over for the party. July 11th Adrian has had his first proper hangover; Pandora had to give Adrian a fireman's lift from their neighbour's house. July 12th Adrian, his father, Pandora and Bert went to the kennels to fetch Sabre, and when Adrian's father refused to pay the fees the proprietor got very angry. Bert and Sabre had a loving reunion which Adrian was very pleased to see. July 13th Adrian found out that they Indians who have moved in are called Mr and Mrs Singh, they are very nice and Bert was speaking in fluent Hindi to Mrs Singh. July 14th A social worker came round to talk to Bert, she was insisting that Bert go and stay at a old people's residential home. ...read more.

March 25th Adrian has had a spiritual awakening, two men said that they were representing the Sunshine Church and their aim was for international peace and that membership is twenty pounds, Adrian has a great urge to go. March 26th Adrian tried to persuade Pandora to join however she refused. March 27th Adrian's father refused to pay the twenty pounds and said it was a load of rubbish, Adrian was forced to agree. March 28th Adrian's father forget to turn the clocks back so Adrian was an hour late for the Pink Bigrade meeting. March 29th Adrian sat next to a girl called Barbra at lunch, she spotted many faults about Pandora, Adrian was forced to agree. March 30th Adrian has now entered into a non-sexual relationship with Barbra, again he finds himself trapped in a love triangle, and Nigel is the only one who knows. March 31st Nigel told the whole school about Adrian and Barbra, when Pandora found out she had to go to the matron's office for the whole afternoon. April 1st Adrian rang Barbra and Barbra told Adrian that their brief relationship is over as Barbra now feels sorry for Pandora. April 2nd Adrian is fifteen, he got loads of cards and a model aeroplane which he can build from Bert, the workers at the canal gave Adrian some glue. Pandora completely ignored Adrian's birthday. April 3rd It is official, England is at war with Argentina, when Adrian told his father, he jumped out of bed, until Adrian told him that the Falklands were eighty six thousand miles from England did he crawl back to bed. Adrian was making the toy aeroplane. After he had finished, he had a little sniff of the glue, it stuck to his nose. His father took him too A&E, and the doctor laughed and put on Adrian's patients car that Adrian was a glue sniffer Adrian rang up Pandora, she has forgiven him and is coming to see him. Adrian finally says that love is the only thing that keeps him sane. ?? ?? ?? ?? Kiran Modi ...read more.