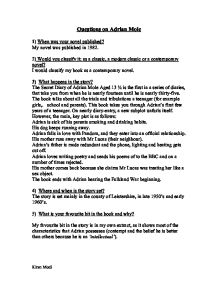 Questions on Adrian Mole 1) When was your novel published? My novel was published in 1982. 2) Would you classify it: as a classic, a modern classic or a contemporary novel? I would classify my book as a contemporary novel. 3) What happens in the story? The Secret Diary of Adrian Mole Aged 13 3/4 is the first in a series of diaries, that take you from when he is nearly fourteen until he is nearly thirty-five. The book talks about all the trials and tribulations a teenager (for example girls,. school and parents). This book takes you through Adrian's first few years of a teenager. On nearly diary-entry, a new subplot unfurls itself. However, the main, key plot is as follows: Adrian is sick of his parents smoking and drinking habits. His dog keeps running away. Adrian falls in love with Pandora, and they enter into an official relationship. His mother runs away with Mr Lucas (their neighbour). Adrian's father is made redundant and the phone, lighting and heating gets cut off. ...read more.

Adrian's Mother- Adrian's mother throughout the book has a desire to have a relationship with a man that will fulfil her sexual needs. This is visible in two instances, firstly when she is on the phone to Adrian from Sheffield (were she and Mr Lucas were living) and said 'I want a man who fulfils all my sexual needs and Bimbo (Mr Lucas) is that man'. Secondly, she wears elaborate underwear hoping that Adrian's father will notice, however she tells Adrian that his father is just not living up to her sexual desires. Adrian's Father- Adrian's father is very depressed throughout the book this is because of four main reasons: He is trying to get a job to feed his family. His wife has left him. He has a teenage son to raise. 8) How do the characters relate to each other in their action and behaviour? Adrian and His Mother- Overall his attitude towards his mother is not very good as at the start of the book she doesn't take an interest in his health. ...read more.

Once Adrian is out of hospital, he discovers England is at war with Argentina. 14) Explain why the book has been given its title The book has been given its title because it is literally the secret diary of Adrian Mole starting when he is 13 3/4. 15) If you could play any character in the film/play of your book who would you choose any why? I would choose to be Adrian as playing him would be quite an amusing and lighthearted role to play. 16) What other books has this author written, and which ones have you read? Sue Townsend has written: Weapons of Mass Destruction The Cappuccino Years Adrian Mole series True Confessions of Adrian Mole The Prime Minister at Number 10 I have read all of the above. 17) Do you think both male and female readers would equally enjoy your book? I feel female readers could read the book and enjoy it; however I feel male authors would enjoy it more as they can relate to it. 18) Can you suggest another book of a similar style/genre? I feel Falling into Glory by Robert Westall is the same type of genre/style to Adrian Mole. ?? ?? ?? ?? Kiran Modi ...read more.