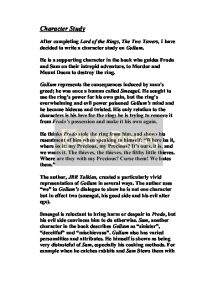 After completing Lord of the Rings, The TwoTowers , I have decided to write a character study on Gollum.

Character Study After completing Lord of the Rings, The Two Towers, I have decided to write a character study on Gollum. He is a supporting character in the book who guides Frodo and Sam on their intrepid adventure, to Mordor and Mount Doom to destroy the ring. Gollum represents the consequences induced by man's greed; he was once a human called Smeagol. He sought to use the ring's power for his own gain, but the ring's overwhelming and evil power poisoned Gollum's mind and he became hideous and twisted. His only relation to the characters is his love for the ring; he is trying to remove it from Frodo's possession and make it his own again. ...read more.

Smeagol is reluctant to bring harm or despair to Frodo, but his evil side convinces him to do otherwise. Sam, another character in the book describes Gollum as "sinister", "deceitful" and "mischievous". Gollum also has varied personalities and attributes. He himself is shown as being very distasteful of Sam, especially his cooking methods. For example when he catches rabbits and Sam Stews them with herbs, Gollum unpleasantly replies to this with "Stupid fat Hobbit!" This image from the film interprets Gollum's expressions described in the book to the greatest detail "Gollum looked at Sam in dismay" Gollum is very similar to Boromir from the first book of the Lord of the Rings Trilogy, The Fellowship of the Ring. ...read more.

And it was coming down head first, as if it was smelling its way. Now and again it lifted its head slowly, turning it right back on its long skinny neck, and the hobbits caught a glimpse of two small pale gleaming lights, its eyes that blinked at the moon for a moment and then were quickly lidded again." I think that the author has created this character well by the use of alternate personalities (the use of a good and evil side). This gives depth and diversity to what would have perhaps been a very plain character. In fact, these vivid descriptions in the book helped the Director of the Lord of the Rings movies to create Gollum's character very convincingly. ?? ?? ?? ?? ...read more.