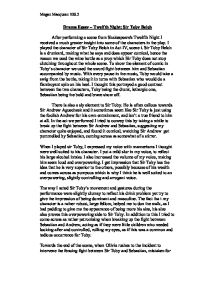 After performing a scene from Shakespeare's Twelfth Night I received a much greater insight into some of the characters in the play. I played the character of Sir Toby Belch in Act IV, scene i.

Drama Essay - Twelfth Night: Sir Toby Belch After performing a scene from Shakespeare's Twelfth Night I received a much greater insight into some of the characters in the play. I played the character of Sir Toby Belch in Act IV, scene i. Sir Toby Belch is a drunkard, making what he says and does appear comical, hence the reason we used the wine bottle as a prop which Sir Toby does not stop clutching throughout the whole scene. To show the element of comic in Toby's character we used the sword fight between him and Sebastian accompanied by music. With every pause in the music, Toby would take a swig from the bottle, taking it in turns with Sebastian who would do a flamboyant spin on his heel. ...read more.

When I played sir Toby, I expressed my voice with mannerisms I thought were well suited to his character. I put a mild slur in my voice, to reflect his large alcohol intake. I also increased the volume of my voice, making him seem loud and overpowering. I get impression that Sir Toby has the idea that he is very superior to the others, possibly because of his wealth and comes across as pompous which is why I think he is well suited to an overpowering, slightly controlling and arrogant voice. The way I acted Sir Toby's movement and gestures during the performance were slightly clumsy to reflect his drink problem yet try to give the impression of being dominant and masculine. ...read more.

She angrily shouts at Sir Toby, "Rudesby, be gone!" In response to this comment I tried to look offended and almost hurt as if I was innocent and could not understand what was going on, Toby had obviously been trying to act the hero by breaking up the fight and rising to Sebastian's challenge, and was annoyed when Olivia dismissed him irately. In conclusion I think the overall piece could have been perfected with more time, which would have encouraged more characteristics and mannerisms from the characters to show through. When playing Sir Toby Belch's character I discovered an increasing number of interesting aspects of his personality and tried to portray them as best I could, and thought we balanced a relatively serious scene with some humour. [email protected] Megan Macqueen 10S.2 ...read more.