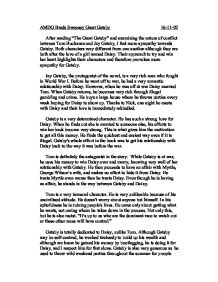 After reading &quot;The Great Gatsby&quot; and examining the nature of conflict between Tom Buchanan and Jay Gatsby, I feel more sympathy towards Gatsby.

AMDG Breda Sweeney Great Gatsby 16-11-02 After reading "The Great Gatsby" and examining the nature of conflict between Tom Buchanan and Jay Gatsby, I feel more sympathy towards Gatsby. Both characters very different from one another although they are both after the love of a girl named Daisy. Their approach to try and win her heart highlights their characters and therefore provokes more sympathy for Gatsby. Jay Gatsby, the protagonist of the novel, is a very rich man who fought in World War I. Before he went off to war, he had a very romantic relationship with Daisy. However, when he was off at war Daisy married Tom. When Gatsby returns, he becomes very rich through illegal gambling and crime. He buys a large house where he throws parties every week hoping for Daisy to show up. ...read more.

He treats Myrtle even worse then he treats Daisy. Even though he is having an affair, he stands in the way between Gatsby and Daisy. Tom is a very immoral character. He is very unlikeable because of his uncivilised attitude. He doesn't worry about anyone but himself. In his spitefulness he is ruining people's lives. He cares only about getting what he wants, not caring whom he takes down in the process. Not only this, but he is also racist. "It's up to us who are the dominant race to watch out or these other races will have control." Gatsby is totally dedicated to Daisy, unlike Tom. Although Gatsby may be self-centred, he worked tirelessly to build up his wealth and although we know he gained his money by bootlegging, he is doing it for Daisy, and I respect him for that alone. ...read more.

At this point Gatsby becomes a martyr for Daisy as he takes the blame for the death of Myrtle. Gatsby didn't think about himself once through all of this, all he was worried about was Daisy. This results in the death of Gatsby. Tom sets George, Myrtle's husband, on him, who ends up shooting him in Gatsby's own pool. Tom does not think twice about Gatsby after this, he totally forgets about both him and Myrtle. Tom is tough, wealthy and has no moral scruples. I find the end of the book very satisfactory, as emphasizes how entirely self-centred and insensitive Tom Buchanan really is. We also see how unselfish Jay Gatsby is, and how strong the love he had for Daisy was, that he was willing to give up his own life. The book also makes a strong point by showing us the effects of what can happen if we have too much money. ...read more.