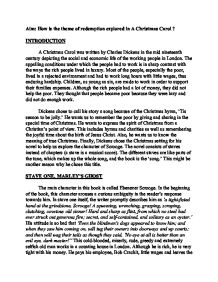 Aim: How is the theme of redemption explored in A Christmas Carol

Aim: How is the theme of redemption explored in A Christmas Carol ? INTRODUCTION A Christmas Carol was written by Charles Dickens in the mid nineteenth century depicting the social and economic life of the working people in London. The appalling conditions under which the people had to work is in sharp contrast with the ways the rich people lived in luxury. Most of the people, especially the poor, lived in a rejected environment and had to work long hours with little wages, thus enduring hardship. Children, as young as six, are made to work in order to support their families expenses. Although the rich people had a lot of money, they did not help the poor. They thought that people became poor because they were lazy and did not do enough work. Dickens chose to call his story a song because of the Christmas hymn, 'Tis season to be jolly.' He wants us to remember the poor by giving and sharing in the special time of Christmas. He wants to express the spirit of Christmas from a Christian's point of view. This includes hymns and charities as well as remembering the joyful time about the birth of Jesus Christ. Also, he wants us to know the meaning of true Christmas. Finally, Dickens chose the Christmas setting for his novel to help us explore the character of Scrooge. The novel consists of staves instead of chapters (a stave is a musical score). The different staves are like parts of the tune, which makes up the whole song, and the book is the 'song.' This might be another reason why he chose this title. STAVE ONE, MARLEY'S GHOST The main character in this book is called Ebenezer Scrooge. ...read more.

She is a woman who is very fond of Scrooge; but she leaves him because his lust for money eclipses his ability to love others. This scene shows us that money has an overwhelming power to destroy love and everything around you- even your family. Overall, this stave shows that the attitude of Scrooge is changing and that his character is undergoing a gradual metamorphosis. STAVE THREE, THE SECOND OF THE THREE SPIRITS The imperceptible changes in Scrooge's attitude are becoming gradually pronounced when he visits the Crachit's house and his nephew's Christmas party during the second journey of shadows. This journey's guide is by another spirit, The Ghost of Christmas Present. Unlike the previous spirit, this one is a majestic giant which wears a green fur robe. The spirit takes Scrooge to a number of places where people are happy with the little money they have. He takes Scrooge through London to unveil Christmas as it will happen that year. Firstly, they come to a London street: the air is cold but everybody is gleefully helping to shove snow from the pavements, and all the shops are close for Christmas. Secondly, they arrive at the Crachit's house. Even though the family is poor, they are still contented and are preparing a miniature feast in their small home. In this scene, he sees Bob Crachit's son, Tiny Tim. This boy is on crutches. Scrooge is told that Tiny Tim will die in the near future if no help is given. This shocks Scrooge, because Tiny Tim is such a nice humble boy. His kindness and humility warms Scrooge's heart. He begins to realise that the condition of the house and suffering of Tiny Tim is caused by himself because he is not paying Mr Crachit enough. ...read more.

His behaviour in that morning is so unusual that one could describe him as a mad person. He goes into different parts of the house pointing out what has happened in that very place in the previous night. Also, he is so desperate to share his newly found Christmas spirit that he does not realise he is saying hello to everybody. He promptly purchases a giant turkey for the Crachits in the same morning. Later he attends his nephew's Christmas dinner party. As his former self hated Christmas, all the guests are very surprised by his presence, even his nephew. He sees his nephew's wife and accepts her. The next day, Scrooge goes back to his office very early. He tries to catch Bob Crachit arriving late to work as so to make a joke out of it. Scrooge raises Bob's salary and helps his struggling family, especially Tiny Tim. He adopts Tiny Tim and acts as a second father for the latter. Ever since, Scrooge has kept his Christmas promise and had totally reformed his character by changing from his wicked, negative personality into a positive, kind and welcoming person. He has also stopped using anti-Christian terms when speaking. He has become nice to the poor and is very willing to help. He has learnt that money is not as important as loyalty, friendship and happiness, therefore he makes up with this nephew and offers charity as from now on. CONCLUSION The moral of this story is that generosity and happiness come first, not money. Also, Dickens is trying to put forward the idea of Christianity which is all about love and commitment. He is telling us that we must be kind to others, and he also makes us understand that if we are doing wrong, we will pay for it sometimes in our life. In other words, you reap what you saw. ...read more.