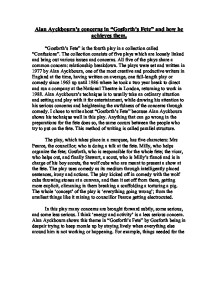 Alan Ayckbourn's concerns in &quot;Gosforth'sFete&quot; and how he achieves them.

Alan Ayckbourn's concerns in "Gosforth's Fete" and how he achieves them. "Gosforth's Fete" is the fourth play in a collection called "Confusions". The collection consists of five plays which are loosely linked and bring out various issues and concerns. All five of the plays share a common concern: relationship breakdown. The plays were set and written in 1977 by Alan Ayckbourn, one of the most creative and productive writers in England at the time, having written on average, one full-length play or comedy since 1965 up until 1986 where he took a two year break to direct and run a company at the National Theatre in London, returning to work in 1988. Alan Ayckbourn's technique is to usually take an ordinary situation and setting and play with it for entertainment, while drawing his attention to his serious concerns and heightening the awfulness of the concerns through comedy. I chose to write about "Gosforth's Fete" because Alan Ayckbourn shows his technique well in this play. Anything that can go wrong in the preparations for the fete does so, the same occurs between the people who try to put on the fete. ...read more.

I think 'energy and activity' is a less serious concern. Alan Ayckbourn shows this theme in "Gosforth's Fete" by Gosforth being in despair trying to keep morale up by staying lively when everything else around him is not working or happening. For example, things needed for the fete arrive late, like the live band. Other less serious concerns, I think, are failed plans, taking responsibility, and child problems. There are so many failed plans in the play that almost anything that could go wrong went wrong. Taking responsibility was shown as a theme with everyone in the play having to rush their many jobs. For example Stewart had responsibility with his wolf cubs and the platform for the stage, and it seemed that he couldn't handle both. The wolf cubs also perfectly demonstrate the theme of child problems. They never seem to behave and therefore end up injuring themselves in an incident where they break a scaffolding. The play, of course, has some serious and more thought provoking concerns like friendship and village gossip. ...read more.

Other plays as regards to methods are put through a median of comedy and irony. The author turns a usual situation and twists it for great entertainment, to draw the audience on the serious concerns. To conclude, I can say that I found this play enjoyable and definitely entertaining, to say the least. But to enjoy this play to its full potential, I would have to see it performed in theatre, to understand the concerns more fully. I think this play also achieved its target to entertain the audience while letting them know about issues and concerns in our modern lives and letting us think about something that we may have not thought about before. This is why I think the play reached success, and I also believe that this play was warily crafted to reach that success. The main aim of the play was to let audiences learn something from it, and I certainly have. I learned the lessons of betrayal and Friendship. The most enjoyable part of the play is that the aspects and concerns from 1977 can still relate to nowadays, making that much more enjoyable. ...read more.