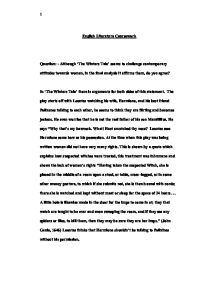 Although &amp;#145;The Winters Tale&amp;#146; seems to challenge contemporary attitudes towards women, in the final analysis it affirms them, do you agree?

English Literature Coursework Question: - Although 'The Winters Tale' seems to challenge contemporary attitudes towards women, in the final analysis it affirms them, do you agree? In 'The Winters Tale' there is arguments for both sides of this statement. The play starts off with Leontes watching his wife, Hermione, and his best friend Polixenes talking to each other, he seems to think they are flirting and becomes jealous. He even worries that he is not the real father of his son Mamiillius. He says "Why that's my bawcock. What! Hast smutched thy nose? Leontes sees Hermione some how as his possession. At the time when this play was being written women did not have very many rights. This is shown by a quote which explains how suspected witches were treated, this treatment was inhumane and shows the lack of women's rights "Having taken the suspected Witch, she is placed in the middle of a room upon a stool, or table, cross-legged, or in some other uneasy posture, to which if she submits not, she is then bound with cords; there she is watched and kept without meat or sleep for the space of 24 hours. . . A little hole is likewise made in the door for the imps to come in at; they that watch are taught to be ever and anon sweeping the room, and if they see any spiders or flies, to kill them, then they may be sure they are her imps." ...read more.

This point in the play marks the entrance of the strongest female character of the play in Paulina. Paullina takes Hermione away and then comes back with the news that she is dead. When Paulina starts to shout at Leontes about the way in which he treated Hermione she is quickly accused of sexual infidelity because of her outburst. Leonties ridicules Antigonus Paulina's husband about her outburst and tells him to keep her quite, it is as if Leontes thinks that that Antigonus owns Paulina and can control her, as Leontes soon finds out it is not easy to control Paulina. After this incident in the play Paulina seems to be able to control Leontes in every thing he does, this would have been very unusual at the time when this play was written. Paulina seems to have a lot of control over Leontes she uses this power to manipulate him and make him do what she wants. Although what Leonties did was wrong the way in which Paulina is using Leontes guilt to manipulate him is not very moral, this explains why modern audiences may not have much sympathy for Paulina. At this time it was not unusual for people to remarry after the death of a partner, in fact it was very common, this was because of the low life expectancy. So the normal thing for Leontes to do would have been to remarry, but because of Paullina's constant reminder of Hermione he cannot do this. ...read more.

However this is probably the view that a modern audience would take. In the end Leontes gets his wife back and also his daughter. Although he was very unhappy during the time Hermione was dead he will now be happy. However Paulina who seemed to be in control of Leontes now has nothing to manipulate him with. Her husband Antigionus is dead and she has not remarried either. This is were Leontes takes over again as the strongest character in the play. He pairs Paulina off with his servant Camillo. He doesn't even ask her. At the time when the play was written this would no have been socially acceptable, however it could happen and would not have surprised a Shakespearean audience that much. It would have been like a strange movie plot in today's terms, and could be believed but a modern audience would find it very hard to believe. In conclusion there is a lot of ideas in the play, which show the opinions of women at the time which this book was written. At the start the man is in charge, this is how it would have been in Shakespeare's time. However in the middle a women seems in charge this would not have been the case in the 17th century, but in the end it is Leonties who is in control and ends up with the best outcome, I agree with the title that the winters tale confirms contemporary attitudes towards women in the 17th century. By Neil Whiteside. ...read more.