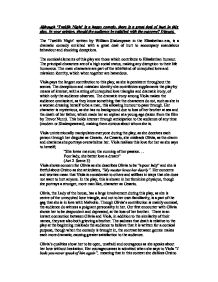 Although 'Twelfth Night' is a happy comedy, there is a great deal of hurt in this play. In your opinion, should the audience be satisfied with the outcome? Discuss.

Although 'Twelfth Night' is a happy comedy, there is a great deal of hurt in this play. In your opinion, should the audience be satisfied with the outcome? Discuss. The 'Twelfth Night' written by William Shakespeare in the Elizabethan era, is a dramatic comedy enriched with a great deal of hurt to accompany scandalous behaviour and shocking deceptions. The comical elements of this play are those which contribute to Elizabethan humour. The principal characters are of a high social status, making any disruption to their life humorous. The main characters are part of the whirlwind of unrequited love and mistaken identity, which when together are hazardous. Viola pays the largest contribution to this play, as she is persistent throughout the scenes. The deceptions and mistaken identity she contributes supplements the play by means of interest, with a string of unrequited love triangles and dramatic irony, of which only the audience observes. The dramatic irony among Viola makes the audience omniscient, as they know something that the characters do not, such as she is a woman dressing herself to be a man, this allowing humour to pass through. Her character is mysterious, as she has no background due to loss of her brother at sea and the death of her father, which made her an orphan at a young age (taken from the film by Trevor Nunn). This holds interest through anticipation to the audience of any time (modern or Shakespearean), making them curious about whom she is. Viola unintentionally manipulates everyone during the play, as she deceives each person through her disguise as Cesario. As Cesario, she misleads Olivia, as the charm and charisma she portrays overwhelms her. Viola realises this love for her as she says to herself; "She loves me sure; the cunning of her passion. . . Poor lady, she better love a dream" (Act 2 Scene 3) Viola shows concern for Olivia as she describes Olivia to be "a poor lady" and she is fretful about Orsino as she articulates, "My master loves her dearly". ...read more.

Feste The more fool, Madonna, to mourn for your brother's soul being in heaven. Take away the fool, gentlemen. We do encounter Feste a lot throughout the play and we see him behaving riotously, this is extremely humorous, though he is a stronger character for revealing hidden truths. As Feste is a trustworthy character to Olivia, the audience seem to trust him as well, through the hidden meanings of what he says he seems to know a lot about the misconceptions of the play, making him an omniscient character. If this omniscience were to be contained with any other character, I feel the truths would be let out, making the play more predictable, resulting in the twists not being as dramatic or as satisfying to the audience. The main servant of Olivia's house is Maria. She is very close friends with Sir Toby, Sir Andrew and Feste, as well as also disliking Malvolio. Her character contains sexual innviendo with word play, which is extremely appealing to a Shakespearean audience, also humorous to modern day. She appears to be obedient, but her stubbornness shows her to be not willing as she is aware of her own feelings. She is mentally alert throughout the play, showing concern for Sir Toby, "You must come in earlier o'nights". She later goes on to run away and marry Sir Toby, she is not particularly comical. Sebastian comes in later in the play, as Viola's brother. Ironically he has a strong similarity to Cesario's physique, so everyone misconceives him to be Cesario. We immediately like him, as we like Viola and the audience feel relieved that he is not dead. Despite our first conceptions of him, I do not feel this way after analysing the play. He allows Olivia to be misled into believing he is Cesario, and carries on their relationship. I appreciate he was confused, but he deceived people by not telling the truth. ...read more.

In your opinion, should the audience be satisfied with the outcome? Discuss.' is that the audience of any time, Elizabethan or modern, should be greatly satisfied with the outcome of the play. Originally, I expected the plot of the play to opposite to what it was. I, as well as many others, expected a serious drama, lacking comedy or love, not really appealing to a modern audience of teenagers. Much to our surprise, we encountered a play enriched with love and comedy although accompanying hurtful and more serious elements. The play ended stereotypically 'happily ever after', much to the audience's satisfaction. The twelfth night was originally the 12th day around Christmas, where the lords and the ladies of a house would exchange roles with their servants, causing havoc and chaos. This title suited the play, due to the servants marrying their lord or lady. The festivity of Christmas in Elizabethan time aloud people to do as they please, especially in Shakespeare's plays, being called the never-never land. I feel that watching the play in a theatre, would have been even more rewarding to an audience, of which a Shakespearean audience would have done so. The film I watched by Trevor Nunn, still portrayed each element and detail outstandingly. The attention to detail Shakespeare gave to the characters in love, was satisfying to an audience of any time, as the passions they portrayed were excellent. The love then blended harshly with deception, misunderstandings, farce, dramatic irony and unrequited love made each of these more powerful. The strong comparisons between the elements made the comedy and hurtfulness dramatic and unexpected. The anticipation of what is to happen next, gave the audience greater depth into the film, keeping them captivated. The revenge given to the arrogant characters such as Sir Toby and Malvolio was comical, as well as being unexpected. The love and comparisons given to the 'good' characters, was tearful to see, making it even more so 'fairy tale' like. The outcomes were what was deserved by the characters, making the audience, of any time, fulfilled with the ending, making them satisfied with the play. ...read more.