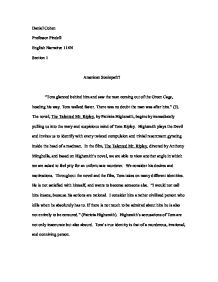 Daniel Cohen Professor Pindell English Narrative 114N Section 1 American Sociopath? "Tom glanced behind him and saw the man coming out of the Green Cage, heading his way. Tom walked faster. There was no doubt the man was after him." (3). The novel, The Talented Mr. Ripley, by Patricia Highsmith, begins by immediately pulling us into the wary and suspicious mind of Tom Ripley. Highsmith plays the Devil and invites us to identify with every twisted compulsion and trivial resentment gyrating inside the head of a madman. In the film, The Talented Mr. Ripley, directed by Anthony Minghella, and based on Highsmith's novel, we are able to view another angle in which we are asked to feel pity for an unfortunate murderer. We consider his desires and motivations. Throughout the novel and the film, Tom takes on many different identities. He is not satisfied with himself, and wants to become someone else. "I would not call him insane, because his actions are rational. I consider him a rather civilized person who kills when he absolutely has to. If there is not much to be admired about him he is also not entirely to be censured." ...read more.

Ripley's goal in life is to make something of himself, to go from "rags to riches". The color green in this novel is used in many instances to symbolize wealth. "Green Cage" the name of Tom's hangout is a metaphor for wealth and social entrapment. This metaphor for wealth foreshadows Tom's search for another mans identity. Tom will eventually assume the name and identity of Dickie Greenleaf. The way that Tom goes about attaining this goal is unique. He shows his casual attitude towards murder and shows his lack of a conscience. Through his actions we find that he cannot differentiate between right and wrong. Given a choice, he will pick the most practical decision; morality never enters his reasoning. Some men are envious of other men's fortunes. Ripley demanded their identities. The novel and film shows him taking control of the life and identity of Dickie Greenleaf. In the film, Matt Damon is bland and ordinary as the character of Tom Ripley, and then takes on the vividness of others, even a jazz singer. Tom desires to become Dickie. Tom Ripley also seems to have feelings for Dickie Greenleaf. ...read more.

In the quote from Highsmith, she tries to rationalize Ripley's actions. Murder is not a sane way of dealing with problems. Through murder alone we could find that Tom is an insane and vicious person. Tom shows no sign of having a conscience or the ability to make reasonable decisions. When he dislikes someone, he thinks the only rational way to deal with it, is murder. Tom's inability to make moral decisions shows his incapability of being a normal human being. Tom does not hesitate when he decides to murder his victims, simply because he does not feel it is wrong. When Highsmith tries to say that Tom does indeed act in a "rational" manner, it is far from reality and the truth. In the novel, The Talented Mr. Ripley, by Patricia Highsmith, Tom plays a homosexual homicidal maniac. His decisions and actions are reckless and psychotic. The author and film, successfully make the reader sympathize with Tom even though he destroys lives. His unhappiness, leads him to search and adopt other identities. Unfortunately, he will never truly be content because he can never be another person. His misery will always linger in any identity or role that he takes on. ...read more.