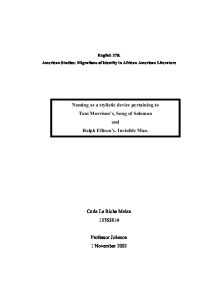 English 278: American Studies: Migrations of Identity in African American Literature Carla Le Riche Malan 13763814 Professor Johnson 1 November 2002 Sound, symbolism and connotations of names used for the titles of the novels, "Invisible Man" and "Song of Solomon", characters and places, provides the reader with clues pertaining to the authors' chosen themes. Names may be directly, symbolically related to function as in Ralph Ellison's, "Invisible Man" by means of sound and connotation or deliberately misleading through inversion, as portrayed by Toni Morrison's use of Biblical inversions in "Song of Solomon". The incorporation of names that hold strong connotations in both the novels complicates the tapestry of explicit symbols and themes, as well as enriching mood and frame of reference. Both authors' incorporation of naming as a stylistic device is done alongside recurring structures, contrasts and other literary devices that help develop theme and mood. Ralph Ellison's title, "Invisible Man" and nameless protagonist, to which it refers, are used as a foreshadowing device of what it means to be invisible. Meaning is ascertained through the protagonist's character, experiences and emotions related to his "invisibility" and his perception of what it means to be invisible and without a fixed identity. The narrator points out that the fault lies in the beholder and is "A matter of the construction of the inner eyes, those eyes through which they look through their physical eyes upon reality." ...read more.

This also seems to mirror a dynamic evident within America as a whole. The Reverend Barbee initially sets up the reader, due to stereotypical connotations associated with what it means to be a reverend or a man of God in Western civilization. However, naming counteracts the assumption associated with what it means to be a reverend, upon analysis of Barbee's first name, Homer. Homer Barbee is blind like the Greek writer and his physical blindness results in symbolic emphasis of pretence and a story, which he can orally illustrate for others, but cannot see himself. In dramatic irony, the reader realises that this character is hiding behind his glasses whilst creating an illusion for the audience in the novel to see into and believe. Toni Morrison's title, "Song of Solomon", is further complicated by its external Biblical frame of reference to the book in the Old Testament and use of several Biblical parallels and Biblical inversions found throughout the novel. Many of the ideas, images and atmospherics from the Old Testament book are translated into Morrison's novel in the form of symbolism and parallels. The Biblical Song of Solomon is a dialogue of love poems written in alternating male and female voices. The speakers are concerned about power and are threatened by a king, just as the black characters in the novel are threatened by slavery and its legacy. ...read more.

Ruth Dead stands in contrast to Pilate in her differing perception of societal roles with regard to femininity. Ruth plays out society's expectations of her as a woman. She functions as a Biblical inversion to the Bible character that vowed to stay by her mother in law's side. "Where'st though go, I shall go." In contrast, Ruth Dead has a bond with her father, Dr Fostor. The surname "Fostor", holds further ironic implications by the connotations it manifests through sound. Ruth was "fostered" and felt cared for by her father, in contrast to the "deadening of her spirit" she has experienced as a result of her marital relationship with Macon Dead. Although both novels discussed, incorporate naming as an important stylistic device, it is important to note the differences the authors have used in employing names in order to contribute to their individual themes. Ralph Ellison has used naming as a contributory strategy according to which the narrator is able to question whether a "fixed identity" exists, or whether his experiences and situations which he feels shape him, delineate a perpetual state change as explored by the theme of invisibility. In contrast, Toni Morrison migrates her protagonist, Milkman, towards an understanding of himself, and his identity, through the discovery of his African ancestry and the portrayal of the central flight motif linked to this liberating discovery. ...read more.