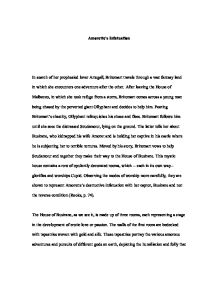 Amorette's Infatuation In search of her prophesied lover Artegall, Britomart travels through a vast fantasy land in which she encounters one adventure after the other. After leaving the House of Malbecco, in which she took refuge from a storm, Britomart comes across a young man being chased by the perverted giant Ollyphant and decides to help him. Fearing Britomart's chastity, Ollyphant relinquishes his chase and flees. Britomart follows him until she sees the distressed Scudamour, lying on the ground. The latter tells her about Busirane, who kidnapped his wife Amoret and is holding her captive in his castle where he is subjecting her to terrible tortures. Moved by his story, Britomart vows to help Scudamour and together they make their way to the House of Busirane. This mystic house contains a row of opulently decorated rooms, which -- each in its own way-- glorifies and worships Cupid. Observing the modes of worship more carefully, they are shown to represent Amorette's destructive infatuation with her captor, Busirane and not the reverse condition (Rooks, p. 74). The House of Busirane, as we see it, is made up of three rooms, each representing a stage in the development of erotic love or passion. The walls of the first room are bedecked with tapestries woven with gold and silk. These tapestries portray the various amorous adventures and pursuits of different gods on earth, depicting the humiliation and folly that lust can lead to. ...read more.

The actors in this performance personify different emotions and states of mind that come with erotic love. Very few of these (like hope and pleasure) are positive, while most of them are very negative. The pair Displeasure and Pleasance, holding an "angry Waspe" (Canto 12, stanza 18, l. 160) and a "hony-lady Bee" (Spencer, Canto 12, stanza 18, l. 161) respectively, shows the somewhat bitter-sweet quality of love . In the third room, Britomart discovers Busirane who is writing a spell in blood dripping from Amorette's heart. The latter is chained to a pillory in front of him. In contrast to the former room, this room contains only evil. It represents the last and most extreme phase of desire in which the lover experiences nothing but pure torment and complete helplessness. The inscription "Be not too bold", on top of the door leading to this innermost room, can consequently be a warning to women, not to let all of their defenses down and completely turn themselves over to their beloved one. In the masque the qualities "Despight" and "Cruelty", typical attributes of the lady and her treatment of her lover in courtly love, carry in the prostrate Amorette as their victim. Because the institution of courtship and the role of the lady within this institution were so well established and universally recognized, the reversal of roles in the masque shows the extremity of the consequences of excessive boldness on the part of the lady. ...read more.

Their marriage, a socially recognized and conventional institution suggests the latter. Another hint is provided by the fact that the masque appears at exactly midnight. Nighttime, and especially midnight, carries with it implications of forbidden love and erotic dreams. This would again apply better to Busirane than to Scudamour. Moreover when the dart is removed from Amorette's heart and the spell is broken, the magical rooms all vanish, but Amorette's love for Scudamour remains: "She much was cheard to heare to heare him mentiond, / Whom of all living wights she loved best" (Spencer, Canto 12 , stanza 41, l. 361-362). This proves that the rooms with their ornaments and performances could not have stood for her feelings for Scudamour. Finally, Busirane is unable to seriously injure Britomart, who throws him to the ground and threatens to kill him. This act suggest that had Amorette been as chaste as Britomart she would have been protected against Busirane and would not have fallen victim to him. Hence, Amorette must have been feeling something other than the chaste love of a woman for her husband. In sum, the state of extreme emotional turbulence represented in the House of Busirane cannot be a reflection of Busirane's feelings for Amorette as her captivity and the masque show her to be the obvious victim of this state. It further cannot represent her love for Scudamour as that would be of a chaste nature and as the removal of the dart from her heart has proved. Hence, the distorted desire portrayed in Busirane's Castle are a representation of the irrational lust Amorette is caught up in and can't free herself of. ...read more.