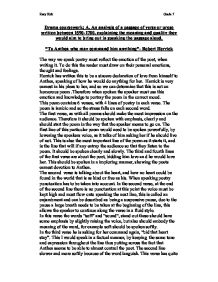 An analysis of a passage of verse or prose written between 1590-1700, explaining the meaning and quality they would aim to bring out in speaking the passage aloud. &quot;To Anthea who may command him anything&quot;- Robert Herrick

Drama coursework; A, An analysis of a passage of verse or prose written between 1590-1700, explaining the meaning and quality they would aim to bring out in speaking the passage aloud. "To Anthea who may command him anything"- Robert Herrick The way we speak poetry must reflect the emotion of the poet, when writing it. To do this the reader must draw on their personal emotions, thought and feelings. Herrick has written this to be a sincere declaration of love from himself to Anthea, speaking of how he would do anything for her. Herrick is very earnest in his pleas to her, and so we can determine that this is not an humorous poem .Therefore when spoken the speaker must use this emotion and knowledge to portray the poem in the correct mood. This poem contains 6 verses, with 4 lines of poetry in each verse. The poem is iambic and so the stress falls on each second word. The first verse, as with all poems should make the most impression on the audience. Therefore it should be spoken with emphasis, clearly and should start the poem in the way that the speaker means to go on. ...read more.

This can be done by altering pitch, volume or emphasis. The final lines emphasis should be on " live and die" these are the two most important words as according to Herrick he is giving to this women in this verse her most important decision of the poem whether he should live or die. Herrick's, "To Anthea who may command him anything" is a powerful poem that needs a great understanding of poetry and feelings in order to speak it effectively. B.) An appreciation of the writing of one poet , showing how knowledge of the period and culture has helped understanding and enjoyment of the work. T.S.Eliot--19th/ 20th century "Aunt Helen" and "A game of chess" T.S.Eliot is one of the most famous poets of his time, born in 1888 in St. Louis in Missouri, he moved to England having graduating from Harvard. His work reflects his development as a Christian writer. T.S.Eliot died in 1965. Eliot has painted a detailed picture of his aunt, he describes her as being unmarried a "maiden". At the point in history of Eliots writing this would have been significant, as women with husbands were seen to have something wrong with them. ...read more.

Much as the upper class do in modern day. The tangled love affair between Lydia Languish and jack Absolute is the centre of the play, many C18th novels or plays were written to have star-crossed lovers as their centre piece. This was most likely to be because of the need to escape from reality in some way, now a days we have television or cinema, in those days reading was one of the only forms of home entertainment. This we can see from the constant gossip that the school for scandal revolves around, the women in the play have nothing else to do bar play cards and gossip about their neighbours. This play marks the decline of family money, Sir Surface begins to sell off his belongings to pay off debts. This started to happen quite a lot in the C18th when family money having been lost through gambling or other such activities, was no longer available and the families had to start selling off their vast estates in order to pay off debts. Understanding the time period that Sheridan wrote in has enabled me to understand better his plays. ?? ?? ?? ?? Katy Kirk Grade 7 ...read more.