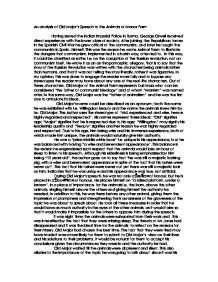 An analysis of Old Major's Speech to the Animals of Manor Farm Having served the Indian Imperial Police in Burma, George Orwell received direct experience with the lower-class of society. After joining the Republican forces in the Spanish Civil War he grew critical of the communists, and later he fought the communists in Spain, himself. This was the reason he wrote Animal Farm: to illustrate the dangers that communism, implemented in a harsh way, often led to. In this way, it could be classified as satire, i.e. on the corruption of the Russian revolution, not on communism itself. He wrote it as an anthropomorphic allegory, that is to say that the story of the Russian Revolution was written with the characters being animals rather than humans, and that it was not telling the story literally, rather it was figurative. In my opinion, this was done to engage the reader more fully and to bypass any stereotypes the reader may have about any one of the real-life characters. Out of these characters, Old Major of the Animal Farm represents Karl Marx who can be considered "the father of communist ideology" and of whom "Marxism" was named after. In the same way, Old Major was the "father of animalism" and he was the first one to articulate its ideas. Old Major's name could be described as an aptonym; both the name he was exhibited with i.e. Willingdon Beauty and the name the animals knew him by i.e. Old Major. The Author uses the stereotype of "old, experienced and wise, hence highly regarded and respected". ...read more.

He even singles out Clover reminding her of the fate of her foals who were all sold. He emphasises his uniqueness in that he was allowed to reach his age, he uses himself as the ideal model and describes his life as "the natural life of a pig". He highlights the fate of the porkers, saying "you will scream your lives at the block within a year". He mentions Boxer, who was described earlier on in the text as "as strong as any two ordinary horses put together", and describes his ultimate fate to be with the knackers who will kill him for the fox-hounds. As I have illustrated, Old Major combines inclusive language, rhetorical questions on issues of utmost concern for the audience, such as the horrors Mr Jones had prepared for their death. An interesting feature of the above examples is the statistical data, Old Major uses. In addition to inclusive language, rhetorical questions of issues of the utmost concern for the animals such as what had been prepared for their deaths, he drives his point home using this data in order to subliminally emphasise to the animals that he is dealing with clear facts which cannot be denied. This obviously gives authority and weight to the points Old Major is making. One such example of this (which has been cited in the previous paragraph) is the following: "You cows...how many thousands of gallons of milk have you given during the last year? And what has happened to that milk which should have been breeding up sturdy calves? ...read more.

The song was, in realty, a summary of the objectives of the speech and the means they would have to take to achieve these. There is additional stress on the idea of "hope", hope for the fields of England "to be trod by beasts alone" and "riches more than mind can picture". After expressing these hopes, the songs last stanza explains how they are to achieve these aims, i.e. "to toil for freedoms sake". The song rousing the emotions of the animals is evident by the fact that it "threw the animals into the wildest excitement", so much so that "the uproar awoke Mr Jones". George Orwell clearly displayed his talent in authoring such a speech: a speech that was effective but succinct. Everything about the character Old Major is engenders respect from the animals, from his name; his appearance; his life, experience and wisdom. Old Major made full use of the setting of his speech, (i.e. placing himself in a place of authority above the audience) and the content of the speech, (i.e. the dream which connects him to powers beyond the audience, his use of language and emotive vocabulary and statistics etc). The effectiveness of the speech in my opinion, was derived from two things, the first was that Old Major manipulated the setting and content of the speech in such a way that he was above the audience in all senses, making it extremely difficult for any animal to oppose him or answer him back. The second was that the content of his speech was designed to arouse the emotions of the audience, by his inclusiveness, use of facts and his succinctness. ...read more.