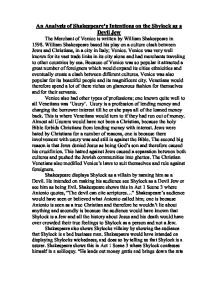 An Analysis of Shakespeare's Intentions on the Shylock as a Devil Jew The Merchant of Venice is written by William Shakespeare in 1598. William Shakespeare based his play on a culture clash between Jews and Christians, in a city in Italy; Venice. Venice was very well known for its vast trade links in its city alone and had merchants traveling to other countries by sea. Because of Venice was so popular it attracted a great number of foreigners which would expand its cities ethnicities and eventually create a clash between different cultures. Venice was also popular for its beautiful people and its magnificent city. Venetians would therefore spend a lot of there riches on glamorous fashion for themselves and for their servants. ...read more.

Shakespeare displays Shylock as a villain by naming him as a Devil. He intended on making his audience see Shylock as a Devil Jew or see him as being Evil. Shakespeare shows this in Act 1 Scene 3 where Antonio quotes, "The devil can cite scriptures..." Shakespeare's audience would have seen or believed what Antonio called him; one is because Antonio is seen as a true Christian and therefore he wouldn't lie about anything and secondly is because the audience would have known that Shylock is a Jew and all the history about Jesus and his death would have over crowded their true feelings to Shylock as a person and not a Jew. Shakespeare also shows Shylocks villainy by showing the audience that Shylock is a bad business man. ...read more.

Shakespeare intended on shocking the audience and showing them an even worse side of Shylock. Shakespeare displays Shylocks villainy by presenting him as a bad father. "Jessica my girl look to my house", Shylock treats his daughter 'Jessica' like a slave, he orders her around and as the quote show, he orders her to guard 'HIS' house and look after his things. Shylock also uses the concept 'My' in most of the quotes he says when ordering Jessica around. This is because Shylock is over protective and likes to think that everything belongs to him. Shakespeare intended on creating Shylock like this because Shylock would have been seen as a greedy person, and Christians aren't supposed to be greedy. Shylock also affects his daughter through his behavior and his manners. This creates a barrier between his father and daughter relationship. Jessica, [Shylocks daughter] becomes ashamed of being Shylocks daughter and begins to hate her father. ...read more.