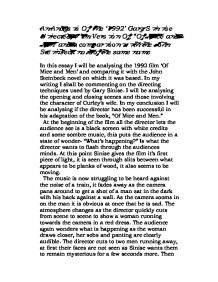 An Analysis Of The '1992' Gary Sinise Directed, Film Version Of, &quot;Of Mice and Men&quot; and a comparison with the John Steinbeck no

An Analysis Of The '1992' Gary Sinise Directed, Film Version Of, "Of Mice and Men" and a comparison with the John Steinbeck novel of the same name In this essay I will be analysing the 1992 film 'Of Mice and Men' and comparing it with the John Steinbeck novel on which it was based. In my writing I shall be commenting on the directing techniques used by Gary Sinise. I will be analysing the opening and closing scenes and those involving the character of Curley's wife. In my conclusion I will be analysing if the director has been successful in his adaptation of the book, "Of Mice and Men." At the beginning of the film all the director lets the audience see is a black screen with white credits and some sombre music, this puts the audience in a state of wonder- "What's happening?" Is what the director wants to flash through the audiences minds. ...read more.

The two men running away are shown again from a high angle shot, this may be to show that they are vulnerable at this time, the director quickly cuts between the two men running away and the men chasing with dogs, guns and horses. The ending of the film starts just after Lennie has killed Curley's wife and Candy discovers the body, he tells George who realises, when he sees what Lennie has done, that their dream is over; he tells Candy to alert the other men, while George goes back to the bunkhouse. When Candy tells the other men that something has happened to Curley's wife they come running. The director focuses on Curley to remind the audience of his and Lennie's fight, and how much he dislikes Lennie. To reduce the time this scene takes Sinise has Curley as being first to the body. Curley finds Lennie's hat on the floor and gets the other men to arm themselves and prepare to chase Lennie. ...read more.

The shot fades to show the train scene again with George in the dark, then it fades again to George and Lennie walking away over the barley fields. I will now analyse the true character of Curley's wife: In the film we are made to feel more sympathetic towards Curley's wife - to achieve this Sinise cuts out the scene in which Curley's wife shouts at Crooks and replaces it with a scene in which she tells how Curley destroyed her only means of entertainment which is her records. As the film progresses she seems to become less of the 'tart' the men portray her as and more the vulnerable young woman she is. For example her dresses become less patterned and less brightly coloured, she wears more white - the colour which symbolises innocence and purity. In the scene when she dies, she seems more friendly than ever and she tells Lennie all her dreams and they become friendly. To conclude: I think Sinise has been successful in his adaptation of the book "Of mice and men". By Daniel Lovegrove 10CW ...read more.