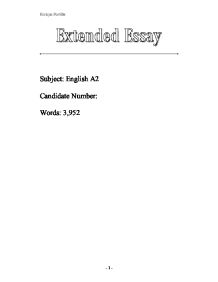 An Analysis of the Origins and Politics in Ninteen Eighty-four

Subject: English A2 Candidate Number: Words: 3,952 CONTENTS PAGE PAGE 1 TO 5: INTRODUCTION & INITIAL ANALYSIS PAGE 5 TO 7: STUDY OF STRUCTURE PAGE 7 TO 12: POLITICAL THEME & SOCIAL CHARACTERS PAGE 12 TO 13: WRITING METHODS PAGE 14: CONCLUSION & (BRIEF) INFLUENCE ON MODERN SOCIETY PAGE 15: BIBLIOGRAPHY AN ANALYSIS OF THE ORIGINS AND POLITICS IN NINETEEN EIGHTY-FOUR The book Nineteen EightyFour is one of the most significant political novels written throughout the course of the twentieth century. It's work that had a substantial impact on the world. The objective is to first study in brief from where did his political and literary ideas came from, then how he has established them in his book. In order to analyse Orwell's where ideas originated, first the understanding of what they are must be known and his motives. Orwell wanted to inform English society about the increasing smugness of the time, as he thought it could result in the emerging of governments such as the Bolsheviks or the Nazis. It would be an artificial perspective to say Nineteen EightyFour was written as a prophecy of what was going to happen. Instead, he wrote it as a satirical observation on politics of the time; he was aiming to satirize the growing popularity of the government.1. When reading the book, one may completely associate it with communism and may think it was targeted at it as the book subtly references Russia's Bolshevik government. Instead, his work is targeted at oligarchy. The USSR was an example of oligarchy or totalitarian state, and therefore it is reasonable to think it was an attack on socialism, or the British government: "Ingsoc". Many people saw it that way, mainly because it was written in such problematic time but Orwell did not mean to do that. He denied that it was a hit against Socialism: "My recent novel is not intended as an attack on Socialism... ...read more.

Orwell's ideas on totalitarianism are better portrayed the more segregated he can make the society appear, so he writes of a world that has class separation in the most extreme sense conceivable. He enhances the distinction through contrasts between the living conditions of the Inner Party and the rest of the world, we can see this in everything that Orwell describes about O'Brien's existence, and he has servants, plush carpet and the right to switch of his telescreen. The distinction can possibly be most clearly seen in the cigarettes, Winston smokes from a "crumpled packet" dried out, poorly packed cigarettes that dispel their contents onto the floor should one be so incautious as to hold them upright, in contrast to O'Brien who smokes tightly packed cigarettes with a silky air about them, taken from a shining silver case. It should be noted that Orwell when making this gap between classes to further illustrate the unfairness of such a political model, makes almost no distinction between the proles and the outer party, except on matters of education and intelligence. His reason for this is obvious; Orwell could not possibly put the protagonist in a superior class, as it would undermine his efforts to gain sympathy from the reader, and placing the main character in the proletariat sector would not fit with the plot element of having the proles as a great immovable force, that is frustrating in its inability to act. The proles of Nineteen Eighty-four are in fact as much a character as Winston or Julia. They embody the majority of the people of Oceania, and for Orwell they symbolise the majority of people everywhere. It is consistently mentioned throughout the text that the proles are Winston's frustration, he hopes always that if they could be incited to rebel it would be the end of the reign of terror, but yet they lie dormant, and it is this idea that Orwell is trying to explore. ...read more.

Through the same area of the book the Rhyme of St Clements is used by Orwell to establish a growing tension, and is symbolic of the inevitable end to Julia and Winston's affair. This happens because as one reads the text the reader doubtless remembers the full poem, knowing the final line "Here comes a chopper to chop off your head", it is hard to relax as one sees its approach. This increase in tension serves Orwell's political purpose he wishes to focus the reader on the helplessness before the Party that Winston and Julia are victim to, the feeling that their defeat is inevitable adds to this, and is furthered by Orwell's use of the Rhyme. Above all Orwell's literary methods serve to create a book that has stood as one of the greatest political writings of all time, these techniques have allowed Orwell to write a novel that is impossible to read without being changed forever. Merely skimming through the text for the sake of distraction, which surely was never Orwell's purpose; it is inevitable that Orwell's political beliefs will leave their mark on the reader. This novel has spawned a thousand fictions of its type, and many great works such as the novel A Handmaids Tale by Margaret Atwood or the film Brazil, V for Vendetta owe their lineage to the work of Orwell. More than this the ideas that his idea of language as explored in the book have influenced the English tongue forever, words such as "Doublethink" and "Newspeak" will go down in the dictionary for all time, as will an adjective that I think he would be proud of "Orwellian". However the scope of influence of Nineteen Eighty-four goes beyond literature even beyond language..., to the very subject on which he was commenting. Nineteen Eighty-four changed politics forever, Orwell's warning, along with others of the time was indeed heeded, and humanity was diverted from a path that could easily have been as self-destructive as that described in the novel. ...read more.