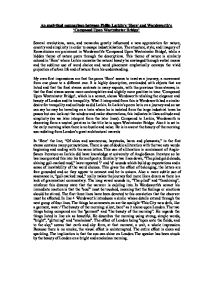 An analytical comparison between Philip Larkin's 'Here' and Wordsworth's 'Composed Upon Westminster Bridge'.

An analytical comparison between Philip Larkin's 'Here' and Wordsworth's 'Composed Upon Westminster Bridge' Several revolutions, wars, and monarchs greatly influenced a new appreciation for nature, country and simplicity in order to escape industrialisation. The structure, style, and imagery of Romanticism are prominent in Wordsworth's 'Composed Upon Westminster Bridge', while a hidden theme of nature peers through the descriptions. This theme of nature is similarly echoed in 'Here' where Larkin recreates the natural beauty he envisaged through verbal means and the sublime use of word choice and word placement emphatically conveys the vivid projection of urban life and of nature from his understanding. My own first impressions are that the poem 'Here' seems to involve a journey, a movement from one place to a different one. It is highly descriptive, overloaded with objects that are listed and that the final stanza contrasts in many aspects, with the previous three stanzas, in that the final stanza seems more contemplative and slightly more positive in tone. 'Composed Upon Westminster Bridge', which is a sonnet, shows Wordsworth relishing the elegance and beauty of London and its tranquility. ...read more.

Typically, swerving is an act of avoidance, you `swerve away from' something, but without a target. You swerve in order to definitely not meet something. But in Larkin's poem swerving from, is complemented by swerving to. The sequence I picked up on was, Swerving from ..... swerving through .... swerving to. The order of our language descriptions often do not match the actual order in which things are experienced as we see in this poem. This sequence is used to describe the residents: they are, "residents from raw estates", who "Push through plate-glass swing doors to their desires". I noticed the extreme length of the poem's first sentence. It ran on until the first line of the last stanza, 24-lines. The final stanza is sharply different as there are three to four short sentences. The long sentence through the first stanzas is all visual note taking and a list is formed with little expansion on the items listed, not may adjectives. As the speaker is on a train I assume they are in a more semi-conscious dream state with vague thoughts streaming in. But in the final stanza he slows down. ...read more.

Wordsworth brings the very city alive as he personifies the river and even the sleeping houses. "...all that mighty heart is lying still!" the metaphor of the heart is very interesting as a heart beats constantly like London, being the capital and the center. The words that might come to mind to characterize, collectively these residents' desires, are particularly cheap and materialistic, "Electric mixers, toasters, washers, driers". However the poem is not only about 'them' but also about the 'me' that tells us about 'them'. The speaker is there in the poem in the same way that a photograph not only records its visible contents but also implies something about the interests of the photographer who chose to record those contents. This is exactly the same for Wordsworth's poem as it also captures and reflects his own ideology as does Lakin. Wordsworth allows the beauty of nature to shine past the ships, towers, domes, theatres, and temples. The hustle and commotion of everyday city life is absent in the "silent, bare" morning and the air is smokeless without the running of factories. Similarly Larkin reproduces his own desire away from the materialistic and urban sprawl of the town and finds himself, "Here" in, "unfenced existence...out of reach." ...read more.