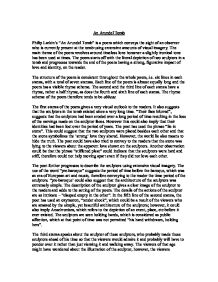 An Arundel Tomb Philip Larkin's "An Arundel Tomb" is a poem which conveys the sight of an observer who is currently present at the tomb using extensive amounts of visual imagery. The main theme of the poem revolves around timeless love however a slightly ironical tone has been used at times. The poem starts off with the literal depiction of two sculptors in a tomb and progresses towards the end of the poem having a strong, figurative impact of love and identity, on the reader. The structure of the poem is consistent throughout the whole poem, i.e. six lines in each stanza, with a total of seven stanzas. Each line of the poem is almost equally long and the poem has a visible rhyme scheme. The second and the third line of each stanza have a rhyme, rather a half rhyme, as does the fourth and sixth line of each stanza. The rhyme scheme of the poem therefore tends to be abbcac The first stanza of the poem gives a very visual outlook to the readers. It also suggests that the sculptors in the tomb existed since a very long time. "Their face blurred", suggests that the sculptors had been eroded over a long period of time resulting in the loss of the carvings made on the sculptor faces. ...read more.

The viewers of that age might have wondered about the illustration of the sculptor, however, the viewers nowadays would consider it common. This observation, when deeply thought of, shows a transition in the thinking of the people. Another point made by the poet is that the sculptors were made in olden times, when Latin was the language used. "A sculptor's sweet commissioned grace Thrown off in helping to prolong The Latin names around the base". This line suggests that in spite of people acknowledging the sculptor's art, the identity of those sculptures was unknown. Even though the sculptor had mentioned their identity, it was in Latin, which is very uncommon in today's world. Therefore, it implies that the hard work of the sculptor was not appreciated to the fullest. The point that the poet has tried to depict in the fourth stanza is that the companionship and their love has been preserved for a "supine stationary voyage". They are not physically moving, but the word of their love is being spread through time. However, this could also imply that their love is no longer present, but the people perceive their gesture of holding hands is love. Another observation is that the since these sculptures have been made till the current time, there have been a lot of change. ...read more.

The visual imagery used such as "trough of smoke in slow suspended skeins" also adds to the feeling of deterioration of their true identity. The poet has also used alliteration (the use of the same consonant sound at the beginning of two or more words) in the phrase "smoke in slow suspended skeins". The poet has probably used this to emphasize on the endless time the sculpture has been present and is being constantly eroded. The last phrase of the sixth stanza "only an attitude remains" along with the seventh stanza, depicts that the poet is trying to convey a simple, yet thoughtful message. The intention of the poem is very well understood by reading the last stanza. The poet tries to convey that in spite of time disfiguring "them unto untruth", their message of love will always be present. The poet tries to say that the identity and the looks of an eternally famous person are not significant, what is important, is the fact that the message they were standing for is clear and ever lasting. The poem is a very well written poem, wherein the poet has included a few literary features, which add to the effect of the message. According to me, the message conveyed, i.e. love is everlasting and even if the emotions and gestures of expressing love change, the purity in the feeling of love forever remains the same. ...read more.