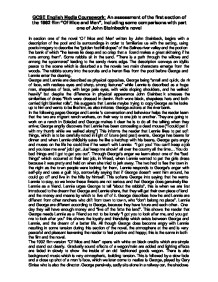 An assessment of the first section of the 1992 film

GCSE English Media Coursework: An assessment of the first section of the 1992 film "Of Mice and Men", including some comparisons with part one of John Steinbeck's novel In section one of the novel 'Of Mice and Men' written by John Steinbeck, begins with a description of the pool and its surroundings in order to familiarize us with the setting, using poetic imagery to describe the "golden foothill slopes" of the Salinas river valley and the pool on the bank of which "the leaves lie deep and so crisp that a lizard makes a great skittering if he runs among them". Some rabbits sit in the sand. "There is a path through the willows and among the sycamores" leading to the sandy rivers edge. The description conveys an idyllic peace to the scene which is disturbed as the novels two main characters emerge from the woods. The rabbits scurry into the scrubs and a heron flies from the pool before George and Lennie enter the clearing. George and Lennie are described as physical opposites, George being "small and quick, dark of face, with restless eyes and sharp, strong features" while Lennie is described as a huge man, shapeless of face, with large pale eyes, with wide sloping shoulders, and he walked heavily" but despite the difference in physical appearance John Steinbeck stresses the similarities of dress "Both were dressed in denim. Both wore black, shapeless hats and both carried tight blanket rolls", this suggests that Lennie maybe trying to copy George as he looks up to him and wants to be like him, as also imitates George actions at the river bank. ...read more.

The two men jump into an irrigation ditch. The man from the start of the film jumps in first, front view and then the other man jumps in after but from a side view. The camera is used as one of the men's view, to the audience; it helps them to feel how the men are feeling. It creates confusion because at first the audience may not know whose view it is and what they are looking at, since the men are in hiding and the viewer can see the weeds overhanging in front of them; this also creates suspense as the audience can see the two men's point of view of the situation. The opening film sequence has a very dramatic and tense start in order to grab the audience's intention, making them want to watch on. In comparison to the novel "Of Mice and Men" which is very different as it opens with a peaceful, happy and serene scene, making the reader build up hope and creating a joyful atmosphere. The camera jumps from the irrigation ditch to the two men (George and Lennie) hitching a freight train at night in order to escape. Another jump follows to a studio location of a 1930's Californian town (Salinas); this scene is added to show the audience the time in which the film is set in and giving them an idea of George and Lennies surrounds and their way of life. While they are in the town Lennie asks George were they are going George said "were going to a ranch to work" this dialog has been added to inform the audience of were they are going and of there current situation. ...read more.

In many ways the first section of the film is similar to the novel such as the dialog they use is almost identical to the novel and the appearance of the characters in the film are almost exactly like how they are described in the novel, Lennie is very big and bulky, while George is small with a tanned face. The director changed the order of the story at the beginning by starting with the girl in the red dress, this was probably changed in order to grab the audience intension at the beginning of the film so then they would want to watch on to see what's happening. Right from the start of the movie you can see that Lennie has a mental illness, and George is taking care of him like a father the same as it is with the novel. Also, you can tell that George gets impatient with Lennie numerous times and that he gets frustrated very easily. I thought the role of George was played very well by Gary Sinise who seems to bring out the role of George perfectly as he coveys Georges caring side as well. As for Lennie this role is probably more of a challenge as he is difficult to convey without sounding cartoonish, John Malkovich didn't work wonders for the role as he used such a silly voice, though if he had used a normal way of speaking the audience would probably find it difficult to see him as mentally handy capped. ...read more.