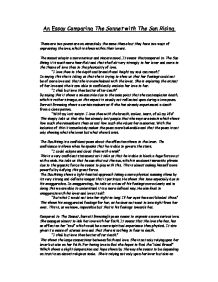 An Essay Comparing The Sonnet with The Sun Rising.

An Essay Comparing The Sonnet with The Sun Rising. These are two poems are on essentially the same theme but they have two ways of expressing the love, which is shown within their lovers. The sonnet adopts a more serious and sincere mood. It seems that compared to The Sun Rising it is much more heartfelt and that she felt very strongly to her lover and more to the theme of love then to the physicality of love. "I love thee to the depth and breadth and height my soul can reach," In saying this she is telling us that she is trying to show us that her feelings could not be of more love and that she is overwhelmed with the lover. She is exploring the extent of her love and she is now able to confidently exclaim her love to her. "I shall but love thee better after death" By saying this it shows a solemn side due to the main point that she contemplates death, which is rather strange, as this aspect is usually not reflected upon during a love poem. Barrett Browning shows a certain sadness as if she has already experienced a death from a close person. ...read more.

It also gives it a sense of eternal love and that there is nothing to fear in death. "I shall but love thee better after death." This shows the large connections between faith and love. She is not only relying upon her lover but also on her faith. For having love in God she hopes to find the "ideal Grace!" Which shows a slight desperation and hope shown by the way she seems to be depending on trust in an almost religious scale. She is relying not only upon her lover but also on God. The fortune of her love depends on God's will. In talking about God she is not confident at all as it is uncertain she feels. "and, if God choose" With faith being included it immediately makes the poem a lot more serious and when dealing with something which obviously means a lot to her and incorporating this into her feelings, it tells us just how important this is. Donne adopts a different approach on what seems to be portrayed as important in his poem. Instead of idolising God it seems that he idolises his lover and himself. "She's all States, and all Princes, I;" He also adopts a slightly sacrilegious approach, which tells us that he is a strong believer of himself being in charge of himself and that he judges his love. ...read more.

The Sun Rising changes tone in several places in the poem. It includes questions contemplating the strength of the sun and the powers of which he defies. He includes commands with which, he tries to order the huge powers, and again defies them. There are also moments of seriousness in which he tries to bring seriousness to his lighthearted poem. This is just to show that his feelings are true towards love. In parts it even seems to contradict itself. The rhythm is regular but complex and varied which reinforces the sense of wit and playfulness. It uses its rhythm in ways, which bring out himself. By using a mixture of Iamb and Trochee he is able to establish a point that the poem is not only revolving around love but himself. The two poems are on the same theme but portray it in two different ways. The Rising Sun shows a lighthearted approach to love giving a confidant and physical approach to a subject, which is usually treated with a more direct and sincere manner. The Sonnet however shows the classic forms of a love poem using direct language, no exaggeration and is in many ways shows a more heart felt meaning. The mix of these two poems shows a powerful feeling about "love." They both portray how it governs their life and this feeling is the most prominent of all the feelings. ...read more.