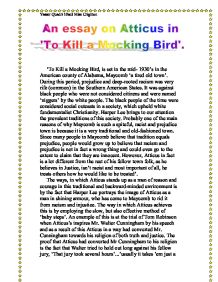 An essay on Atticus in To Kill a Mocking Bird.

'To Kill a Mocking Bird, is set in the mid- 1930's in the American county of Alabama, Maycomb 'a tired old town'. During this period, prejudice and deep-rooted racism was very rife (common) in the Southern American States. It was against black people who were not considered citizens and were named 'niggers' by the white people. The black people of the time were considered social outcasts in a society, which upheld white fundamentalist Christianity. Harper Lee brings to our attention the prevalent traditions of this society. Probably one of the main reasons of why Maycomb is such a spiteful, racist and prejudice town is because it is a very traditional and old-fashioned town. Since many people in Maycomb believe that tradition equals prejudice, people would grow up to believe that racism and prejudice is not in fact a wrong thing and could even go to the extent to claim that they are innocent. ...read more.

This highlights the fact that Walter took into account of what Atticus had said, and tried to hold out for as long as he could whilst trying his best to free Tom Robinson. Due to the reason that Walter was on his own and it was him against the rest of the jury, at the end the opposition jury eventually wore Walter down and so sadly and unjustly Tom Robinson the Mocking bird got convicted guilty. The ways in which Maycomb is a traditional place is by the fact that it is isolated in a way from the outside world and so as a result of this it has become inward looking and now reject the truth that people like Atticus bring with them. Maycomb is also described as a tired old town and whites are segregated from the blacks. However life is still hard for some types of people such as Mr Dolphus Raymond because of the old-fashioned class system. ...read more.

The word 'nigger' I used whether the blacks like it or not which is absolutely a disgrace. Many people call Atticus a Nigger-lover but Atticus sees this as a compliment for defending Tom from prejudice. Atticus fights Southern tradition using the law in his speech in the court. Atticus is a typical role model for people to follow, especially Jem and Scout. Atticus is a very courageous and shows bravery through out the novel, ' I wish Bob Ewell wouldn't chew tobacco', he shows this especially while he defends Tom Robinson. He keeps his cool while everyone taunts him and still shows his respect. He shows respect to Miss Dubose when she is being abusive, by tipping his hat and talking to her in a polite and well-mannered way. Atticus is a man who has allsorts of personalities packed in one, he his noble, courageous, polite and honourable. He has a very big influence on the reader and especially his children. I often ponder about the ways I could myself be an exact reflection of Atticus. Yasser Quadri 10sc3 Miss Crighton ...read more.