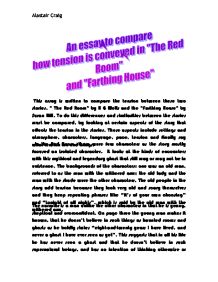 An essay to compare how tension is conveyed in &quot;The Red Room&quot; and &quot;Farthing House&quot;.

An essay to compare how tension is conveyed in "The Red Room" and "Farthing House" This essay is written to compare the tension between these two stories, " The Red Room" by H G Wells and the "Farthing House" by Susan Hill. To do this differences and similarities between the stories must be compared, by looking at certain aspects of the story that effects the tension in the stories. These aspects include settings and atmosphere, characters, language, pace, tension and finally say what tension the end brings. In the Red Room, there were few characters as the story mostly focused an isolated character. It looks at the kinds of encounters with this mythical and legendary ghost that still may or may not be in existence. The backgrounds of the characters: one was an old man, referred to as the man with the withered arm; the old lady and the man with the shade were the other characters. The old people in the story add tension because they look very old and scary themselves and they keep repeating phrases like "it's of your own choosing" and "tonight of all nights", which is said by the old man with the withered arm. The narrator is a man unlike the other characters in that he is young, skeptical and overconfident. On page three the young man makes it known, that he doesn't believe in such things as haunted rooms and ghosts as he boldly states "eight-and-twenty years I have lived, and never a ghost I have ever seen as yet". This suggests that in all his life he has never seen a ghost and that he doesn't believe in such supernatural beings, and has no intention of thinking otherwise or changing his opinion. However, the narrator then takes a different route in his emotions and his confidence soon changes and this makes him a little insecure. ...read more.

This cemetery was mostly filled with the dead bodies of mothers and children. Evidence of the atmosphere being changed is when the narrator then goes to say "I am being very careful now, it would be too easy to claim that I had sensed something sinister, that I was shrouded at once in the atmosphere of a haunted house". From this quote it is clear that the narrator has claimed that she was being very careful now because, she cannot just get scared over something that she only thought she had sensed. Although in the last line of the quote she does say, "I was shrouded at me in the atmosphere of a haunted house". This shows that the atmosphere is now a ghostly one, and no longer the bittersweet atmosphere it once was before. In the "Farthing House" there was also a staircase, however instead of it being a spiral staircase; it was a handsome staircase. Inside, a character called Mrs Pearson took the narrator's luggage and placed it in the Ceda room. It is clear that another difference is present. In the "Red Room" the elderly people gave a bad and eerie atmosphere, whereas in the "Farthing House" they are pleasant and even say "and its such a lovely room, I'm sure you'll like it". On the next line however, it changes again when the narrator says, "How could I have failed?" That line is always said in ghost stories that right before something awful and atrocious happens which creates tension. The Ceda room was now sharing something in common with the spiral staircase in the "Red Room" and this was that someone had previously passed away and died there. This makes her uneasy to know that one has died in the very room she is standing in. It creates an atmosphere of darkness and mystery. She says on page twenty-two "I was in this large, high-ceiling room because it was free, its previous occupants having recently died". ...read more.

He is certain of this although he knows that it as just fear in his mind. The tension is still there and always will be because it was not proved that there was not a ghost and the mystery about the ghost is still there. There is a bit of relief since it is clear that there is no ghost in that room, and that it was just fear of one created. In the "Farthing House" at the end on page thirty-three, the narrator says, "I think of it constantly, see the young, pale, distraught woman, her arms outstretched, searching hear her sobbing, and the crying of her baby. But imagine that she has gone, now that she has what she was looking for". In that ending there is a link between the narrator and the distraught woman, she can relate to her because she too has a burden lifted off her shoulders. Now that she knows why the ghost was there and that she has unraveled the mystery and that there is nothing to fear now, she has nothing to worry about. This is the part of the story where the narrator can relax a bit because now there is relief. In conclusion both stories use elements of tension and suspense. The pace of each story differs in their timing of suspense. One begins almost immediately and the other builds up the tension gradually. Both use the first person perspective. There are twists and surprise in both stories. I think the "Red Room" was more successful as a ghost story as it was more psychological. It really gripped me and it was the sort of book you did not want to put down. I felt excited and thrilled at most of this book. I was eager to read more and wanted to know what was going to happen next. The "Farthing House" had much more description in it and this was not as gripping or exciting as the "Red Room." Although this was an excellent story it did not fill me with as much suspense and tension as the "Red Room." ...read more.