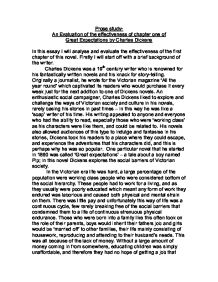 Prose study- An Evaluation of the effectiveness of chapter one of Great Expectations by Charles Dickens In this essay I will analyse and evaluate the effectiveness of the first chapter of this novel. Firstly I will start off with a brief background of the writer. Charles Dickens was a 19th century writer who is renowned for his fantastically written novels and his knack for story-telling. Originally a journalist, he wrote for the Victorian magazine 'All the year round' which captivated its readers who would purchase it every week just for the next addition to one of Dickens novels. An enthusiastic social campaigner, Charles Dickens liked to explore and challenge the ways of Victorian society and culture in his novels, rarely basing his stories in past times - in this way he was like a 'soap' writer of his time. His writing appealed to anyone and everyone who had the ability to read, especially those who were 'working class' as his characters were like them, and could be related to. His novels also allowed audiences of this type to indulge and fantasise in his stories, Dickens took his readers to a place where they could escape, and experience the adventures that his characters did, and this is perhaps why he was so popular. One particular novel that he started in 1860 was called 'Great expectations' - a tale about a boy named Pip; in this novel Dickens explores the social barriers of Victorian society. In the Victorian era life was hard, a large percentage of the population were working class people who were considered bottom of the social hierarchy. These people had to work for a living, and as they usually were poorly educated which meant any form of work they endured was laborious and caused both physical and mental strain on them. There was little pay and unfortunately this way of life was a continuous cycle, few rarely breaking free of the social barriers that condemned them to a life of continuous strenuous physical endurance. ...read more.

Then, every time the criminal speaks to pip it is an order, and he is forceful with trying to extract the information he wants from Pip, as he shouts his orders almost every time. I know this due to the writer's continuous use of exclamation marks. Pip then points out where he lives, which unfortunately is 'a mile or more from the church', the place where Pip is currently situated. This tells us that he is very far from safety. The criminal then turns Pip upside down, a clear display of his strength compared to Pip's weakness. Dickens then describes the criminal as 'sudden and strong' which reinforces this point. Pip was then 'trembling' from fear, whilst the criminal ate the bread from Pip's pocket 'ravenously'; this shows us that the criminal has animal tendencies, perhaps as he has been reduced to his 'caveman-like' state of mind in order to survive. This indicates once again how desperate the man is, and how starving he must have been. Dickens then says how Pip is 'undersized' for his 'years' and 'not strong', compared with the criminal's strength, recklessness, desperation and savage ways Pip was sure to loose in a fight. Dickens then reminds us of the man's desperation and hunger when he says 'Darn me If I couldn't eat em' when referring to Pips cheeks. Pip 'held tighter to the tombstone' which he was sat on - another reference to his fear. Dickens also uses words like 'timidly' when referring to Pip speaking to the criminal, once again showing his vulnerability and childlike behaviour. Pip also refers to the criminal as 'sir', even though he is clearly not a gentleman (the way he is dressed, the way he talks improperly - 'sumever', 'partikler', 'I am a angel') which shows that Pip is a very polite child and has respect for all of his elders. Once the criminal finds out that Pip's uncle is a blacksmith, he says 'blacksmith, eh?' ...read more.

When Dickens says the thought gave Pip 'a terrible turn' we are made aware definitely that Pip pities the convict, and because he does, we do too. Finally we are told that Pip 'looked all round for the horrible young man' which even after his mature display of sympathy for the criminal, reminds us of his childish naivety- as the horrible young man clearly doesn't exist. Although Pip probably isn't as afraid of the criminal anymore, he is still scared of the 'horrible young man' - 'I was frightened again, and ran home without stopping'. The fear of this young man indicates that Pip will almost certainly return food to the criminal the next day. I think Dickens chose to start his novel in this way as it would give the readers an idea of the type of boy Pip - the main character was. It would make the reader warm to him and also make them question what would happen next. The starting chapter pinpoints an event from Pip's life, and the audience is left wondering where the story will go next, if not for their own interest - for Pips. As the opening is so effective the audience will be concerned about what might happen next to pip and therefore they will feel obliged to purchase the next issue of the magazine (at that time) in order to see where the story goes. Overall I think that the opening to this novel is extremely effective. Charles Dickens' writing style is superb. His constant use of sharp contrast in his work creates an astounding effect, as well as his use of alliteration, and repetition to build up tension. I would certainly want to know what happens next in the story and I think many others would too. Dickens really did achieve his goal of pulling people into the story and making them ask questions about what would happen next - a superbly written opening to his novel in my opinion. ...read more.