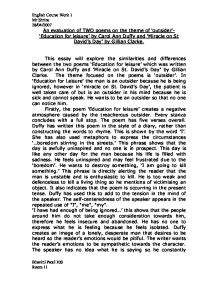 An evaluation of TWO poems on the theme of 'outsider'- 'Education for leisure' by Carol Ann Duffy and 'Miracle on St David's Day' by Gillian Clarke.

An evaluation of TWO poems on the theme of 'outsider'- 'Education for leisure' by Carol Ann Duffy and 'Miracle on St David's Day' by Gillian Clarke. This essay will explore the similarities and differences between the two poems 'Education for leisure' which was written by Carol Ann Duffy and 'Miracle on St. David's Day' by Gillian Clarke. The theme focused on the poems is 'outsider'. In 'Education for Leisure' the man is an outsider because he is being ignored, however in 'miracle on St. David's Day', the patient is well taken care of but is an outsider in his mind because he is sick and cannot speak. He wants to be an outsider so that no one can notice him. Firstly, the poem 'Education for leisure' creates a negative atmosphere caused by the treacherous outsider. Every stanza concludes with a full stop. The poem has five verses overall. Duffy has written this poem in the style of a diary, rather than constructing the words to rhyme. This is shown by the word 'I'. She has also used metaphors to express the circumstances '...boredom stirring in the streets.' This phrase shows that the day is awfully uninspired and no one is in prospect. This day is like any other day for the man because his life is filled with sadness. ...read more.

He wants to be in the middle of everything. I think that he is very dangerous. I personally feel that the man is self deluded. The second poem has numerous differences and only a few similarities. The poem 'Miracle on St.David's Day' has eight verses altogether and each of them have five lines except for the last verse, which has three lines. Clarke wrote a sudden change of structure to show a miracle occurring. She has used a different structure to show this. It was written about St. David's Day which every year is on the first of March. The key colour of the poem is yellow. This indicated by the words; 'sun ', 'daffodils' and the colour 'yellow' itself. When the colour yellow is being referred to, the reader directly gets the vibe that it is warm, bright and a positive atmosphere. Clarke has used this colour so that the reader can visualise the day, and he reveals the atmosphere of the poem. In this poem, the poet speaks for herself as she writes a diary to express the miracle she saw. This is shown by the word 'I'. 'I am reading poetry to the insane.' She is reading poetry to mentally ill people who may not absorb what she has to say. ...read more.

David's Day', the key colour is '...yellow...'.This represents the daffodils, and the weather. In 'Education for Leisure', the man is an outsider because he is a loner but he does not want to be one. He wants to be heard but people are not taking any notice of him. In 'Miracle on St. David's Day' the man is an outsider because he cannot talk or communicate to the outside world. He wants to be ignored and left alone. In my opinion, I prefer 'Miracle on St David's day' rather than 'Education for Leisure.' This is because the poet has used more poetic devices such as; repetition, metaphors, similes, personification and alliterations to reveal the mood and atmosphere. I also like this poem due to the effect caused while I was reading it. It gives a gentle touch of happiness and inspiration. The key colour is 'yellow', this gives a glimpse of delight. While I was reading it, I did not know what was happening until I read past the middle. It gave suspense while I was reading it. The consequence at the end of the poem gives a gentle effect and it makes the reader realise what has been going on. I do not prefer 'Education for leisure' because while I was reading it, the poem did not create suspense due to the fact that it described exactly what was happening. ?? ?? ?? ?? English Course Work 1 Mr Shrine 28/04/2007 Bhavini Patel 10S Room 11 ...read more.