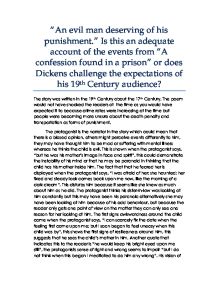 An evil man deserving of his punishment. Is this an adequate account of the events from A confession found in a prison or does Dickens challenge the expectations of his 19th Century audience?

"An evil man deserving of his punishment." Is this an adequate account of the events from "A confession found in a prison" or does Dickens challenge the expectations of his 19th Century audience? The story was written in the 19th Century about the 17th Century. The poem would not have shocked the readers at the time as you would have expected it to because crime rates were increasing at the time but people were becoming more unsure about the death penalty and transportation as forms of punishment. The protagonist is the narrator in the story which could mean that there is a biased opinion, others might perceive events differently to him, they may have thought him to be mad or suffering with mental illness whereas he thinks the child is evil. This is shown when the protagonist says, "but he was his mother's image in face and spirit", this could demonstrate the instability of his mind or that he may be paranoid in thinking that the child has his mother inside him. ...read more.

- Or - was bringing up a child putting pressure on them financially? - Or - would the man put a child to death just to cure his paranoia? The use of verbs in the next paragraph first puts the idea of how the murder will come about, words such as "hovered", "peer", and "gliding" all show that he has an obsession or a fascination with the child .When Dickens says "I would peer at him for hours" it gives the reader an idea of how the child is taking over his life. From the mid-section of the poem the rhythm and the speed at which events happen seems to increase. When the line "running joyously along with his silken hair streaming in the wind" is used it depicts the angelic setting for the murder and how venerable the small boy is compared to the man. Another line which further suggests his madness and paranoia is, "His mother's ghost was looking from his eyes". ...read more.

afraid of the men finding the dead body of the child, if he was not guilty he would have not have feared anything. The issue of madness arises again when the following line is used "although it was covered by grass, was as plain to me - its shape, size, depth, jagged sides, and all as if it had been open to the light of day." It shows the paranoia that he is facing and how obvious it looks to him whereas others do not notice. When the bloodhounds arrive the protagonist does not see it as coincidence, he sees it as a conspiracy against him, this could further emphases the state of his mental health. "I fought and bit and caught at them like a madman" is an ironic passage from the story, it shows he doesn't think the way he was acting previous to this would have been deemed mad. Overall the man was suffering from some sort of mental illness and therefore could not have been completely responsible for the actions undertaken. ...read more.