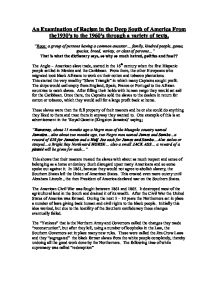 An Examination of Racism in the Deep South of America From the1930's to the 1960's through a variety of texts.

An Examination of Racism in the Deep South of America From the1930's to the 1960's through a variety of texts. "Race: a group of persons having a common ancestor... family, kindred people, genus, species, breed, variety, or class of persons..." That is what the dictionary says, so why so much hatred, politics and fuss?? The Anglo - American slave trade, started in the 16th century when the first Hispanic people settled in Mexico and the Caribbean. From there, the other Europeans who migrated took black Africans to work on their cotton and tobacco plantations. This started the very wealthy "Slave Triangle" in which many Captains sought profit. The ships would sail empty from England, Spain, France or Portugal to the African countries to catch slaves. After filling their holds with human cargo they would set sail for the Caribbean. Once there, the Captains sold the slaves to the dealers in return for cotton or tobacco, which they would sell for a large profit back at home. These slaves were then the full property of their masters and he or she could do anything they liked to them and treat them in anyway they wanted to. One example of this is an advertisement in the 'Royal Gazette (Kingston Jamaica)' saying; "Runaway, about 15 months ago a Negro man of the Mungola country named Jamaica...also about two months ago, two Negro men named James and Sambo...a reward of �10 for Jamaica and a Half Joe each for James and Sambo...Also stolen or strayed...a Bright Bay Northward HORSE... ...read more.

When the service ends and the black people start to emerge, the Klan attack them, beat them up and even kill some of them. Institutional. Segregation is a form of racism. In the film Mississippi Burning the black civil rights activist is not allowed to be buried in the same graveyard as his white friends. Again in the book Roll of Thunder the Logans have to set up their stall in the very back of Strawberry Town market. When Cassie, the narrator, tries to persuade Big Ma to move the wagon forward near the other farmers Big Ma replies; "But them's white folks' wagon Cassie', and although she didn't know it, that explained everything This regime of terror had not only the direct effects of the violence, but it had a great psychological effect. In the four different texts there are two examples of this: Firstly in the Book Roll of Thunder, when Cassie rebels against the offensive words printed in her book Mrs. Crocker, their teacher just replies, "Well that's what you are, now go and sit down". This shows that she is totally brainwashed by the white people that Cassie, herself, and all black people are inferior. In the film Mississippi burning, when Agent Anderson questions Deputy Pell's wife, a white woman, she replies; "Hatred isn't something yar born with, it gets taught. At school they said segregation's in the bible, Genesis 9 verse 27. At seven years age you get it told enough times you believe it, you live it, you breath it, and you marry it". ...read more.

The interrogator tells the Mayor the story of how a black teenager was tortured, threatening to re-enact the mistreatment by taking him to a similar shack and giving graphic detail of a castration with a razor blade. In conclusion it can be seen that the whites needed racism because they were poor. Being poor meant that they were at the bottom of the hierarchy and were social no-bodies. The racism comes from the fact that the poverty stricken whites wanted to feel greater than somebody, so they picked on the only people lover then them; the blacks. This grew into the idea of white supremacy, and it restored a lot of what was before the wars. This grew into racial hatred and the Ku Klux Klan. The worst racists were poor share cropper whites, the better educated whites, business men or religious figures, like Wade Jameson who is an Attorney at Law in Roll of Thunder have no need for the hatred, so they are not racist. Agent Anderson in the Film Mississippi Burning gives a story illustrating this attitude. When he was a boy he asked his father why a black man had a mule and they did not. His father's reaction was to poison the mule so they were equal and remarked to his son "If you aint better than a nigger son, who are you better than?" Agent Anderson goes on to say of his father "But he died before he realised that it was poverty that was killing him" Danny White December 2001 ...read more.