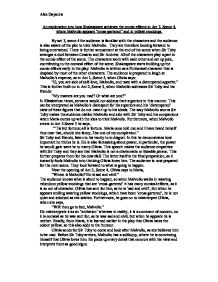 An exploration into how Shakespeare achieves the comic effects in Act 3, Scene 4, where Malvolio appears &quot;cross-gartered&quot; and in yellow stockings.

An exploration into how Shakespeare achieves the comic effects in Act 3, Scene 4, where Malvolio appears "cross-gartered" and in yellow stockings. By act 3, scene 4 the audience is familiar with the characters and the audience is also aware of the plot to trick Malvolio. They are therefore looking forward to being entertained. There is further amusement at the end of the scene when Sir Toby arranges a duel between Cesario and Sir Andrew. All of the characters play a part in the comic effect of the scene. The characters work with each other and set up joke, contributing to the comical effect of the scene. Shakespeare starts building up the comic effects early in the play. Malvolio is written as a Puritanical character that is despised by most of the other characters. The audience is prepared to laugh at Malvolio's expense, as in Act 1, Scene 5, when Olivia says: "O, you are sick of self-love, Malvolio, and taste with a distempered appetite." This is further built on in Act 2, Scene 3, when Malvolio addresses Sir Toby and his friends: "My masters are you mad? ...read more.

Furthermore, he goes on to misinterpret Olivia, when she says, "Wilt thou go to bed, Malvolio." He misinterprets it as an 'invitation' whereas in reality, it is a comment of concern, so it is comical as he was sent for, as he was sad and civil, but when he appears he is neither. Finally, from Maria, it is learned earlier in the play that Olivia hates the colour yellow, so this also adds to the humour. Olivia sends for Sir Toby to come and look after Malvolio, as she believes him to be mad. Before Sir Toby arrives, Malvolio has a soliloquy, where he is convincing himself that Olivia loves him. He picks up every detail that concurs with his view and interprets them as good signs. "O, ho, do you come near me now? No worse man than Sir Toby to look to me? This concurs directly with the letter: she sends him on purpose, that I may appear stubborn to him; for she incites me to be that in the letter." He takes further proof that Olivia loves him when she refers to him as 'fellow', "And when she went away now, 'Let this fellow be looked to'. ...read more.

Sir Andrew is not very clever and writes a 'threatening' letter to Cesario. Fabian and Sir Toby pretend that the letter is very good, but in reality it is poor. Sir Toby then proceeds to play Sir Andrew and Cesario off against each other. Both duellists are told that the other is a deadly killer. Neither of them is a fighter so neither really wants to fight the other, the audience is amused by this situation. Before the duel commences, Antonio disrupts it. Here there is further comedy as Antonio mistakes Cesario for Sebastian There are references in this play to the 'Feast of Fools' that was around during Shakespeare's period. The 'Feast of Fools' was a tradition that took place around Christmas time. For one day, the lowliest or youngest member of a household was placed in charge and given the title of 'Lord of Misrule' Servants gave orders and their masters waited at the table. Ridiculous punishments were awarded and practical jokes were played. The Twelfth Night is full of references to this feast, including the title, The Twelfth Night, which refers to the Twelfth day of Christmas in which the 'Feast of Fools' usually took place. ...read more.