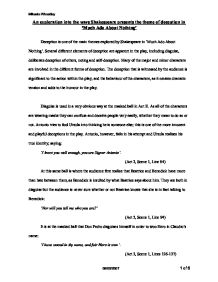 An exploration into the ways Shakespeare presents the theme of deception in 'Much Ado About Nothing' Deception is one of the main themes explored by Shakespeare in 'Much Ado About Nothing'. Several different elements of deception are apparent in the play, including disguise, deliberate deception of others, noting and self-deception. Many of the major and minor characters are involved in the different forms of deception. The deception that is witnessed by the audience is significant to the action within the play, and the behaviour of the characters, as it creates dramatic tension and adds to the humour in the play. Disguise is used in a very obvious way at the masked ball in Act II. As all of the characters are wearing masks they can confuse and deceive people very easily, whether they mean to do so or not. Antonio tries to fool Ursula into thinking he is someone else; this is one of the more innocent and playful deceptions in the play. Antonio, however, fails in his attempt and Ursula realises his true identity; saying: 'I know you well enough, you are Signor Antonio'. (Act 2, Scene 1, Line 84) At this same ball is where the audience first realise that Beatrice and Benedick have more than hate between them, as Benedick is insulted by what Beatrice says about him. ...read more.

At the end of this scene Benedick decides to reciprocate her love: 'For I will be horribly in love with her'. (Act 2, Scene 3, Lines 191-192) Ursula and Hero fool Beatrice in a similar way in Act 2. They talk of Beatrice's scorn of Benedick and how 'wise' and 'noble' Benedick is. This makes Beatrice determined to requite the love Benedick supposedly has for her: 'And Benedick, love on, I will requite thee'. (Act 3, Scene 1, Line 111) Claudio is again deceived, in Act 4, when he is led to believe that Hero is dead. The Friar and Leonato decide that it is best if Hero is believed to be dead before her reputation can be cleared and so that Claudio will feel remorse: 'She dying, as it must be so maintained, Upon the instant that she was accused'. (Act 4, Scene 1, Lines 207-208) As a sign of his remorse, Claudio promises to marry Leonato's niece. He is, however, being deceived again as the woman he will marry is, in fact, Hero. Leonato explains what he wishes Claudio to do: 'But yet my nephew: my brother hath a daughter, Almost the copy of my child that's dead, And she alone is the heir to both of us, Give her the right you should have given her cousin, And so dies my revenge.' ...read more.

They are convincing themselves that they hate one another and engage in a 'merry war': 'You must not, sir, mistake my niece: there is a kind of merry war betwixt Signor Benedick and her: they never meet but there's a skirmish of wit between them.' (Act 1, Scene 1, Lines 45-47) In 'Much Ado About Nothing', Shakespeare explores the many facets of deception. He uses a variety of scenarios to show how deception can create confusion, humour and conflict. The use of disguise at the masked ball creates humour but also gives Don John the opportunity to cause conflict between Hero, Claudio and Don Pedro. The deliberate deception of others is also used to trick Beatrice and Benedick into confessing their love for one another and making Claudio marry Hero. Noting plays a major part in the development of the plot; conversations and situations that are misinterpreted through noting have a significant effect on the action and humour in the play. Self-deception, as a result of this noting, also affects the outcome of the play. Claudio is a victim of self-deception. He notes Hero's appearance and status and believes that he is in love with her, although, he has not got to know her true personality. Typically, Shakespearean comedies end in a marriage with good triumphing over evil, however, unpredictability is added to 'Much Ado About Nothing', with the use of deception, making it a less traditional, but more humourous, Shakespearean comedy. Mikaela Wheatley 08/05/2007 1 of 6 ...read more.