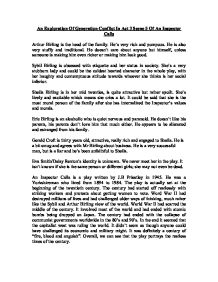 An Exploration Of Generation Conflict In Act 3 Scene 5 Of An Inspector Calls Arthur Birling is the head of the family. He's very rich and pompous. He is also very stuffy and traditional. He doesn't care about anyone but himself, unless someone is making him even richer or making him look good. Sybil Birling is obsessed with etiquette and her status in society. She's a very stubborn lady and could be the coldest hearted character in the whole play, with her haughty and contemptuous attitude towards whoever she thinks is her social inferior. Sheila Birling is in her mid twenties, is quite attractive but rather spoilt. She's lively and excitable which means she cries a lot. It could be said that she is the most moral person of the family after she has internalized the Inspector's values and morals. Eric Birling is an alcoholic who is quiet nervous and paranoid. He doesn't like his parents, his parents don't love him that much either. He appears to be alienated and estranged from his family. Gerald Croft is thirty years old, attractive, really rich and engaged to Sheila. He is a bit smug and agrees with Mr Birling about business. He is a very successful man, but is a liar and he's been unfaithful to Sheila. Eva Smith/Daisy Renton's identity is unknown. We never meet her in the play. It isn't known if she is the same person or different girls; she may not even be dead. An Inspector Calls is a play written by J.B Priestley in 1945. He was a Yorkshireman who lived from 1894 to 1984. The play is actually set at the beginning of the twentieth century. The century had started off restlessly with striking workers and protests about getting women to vote. Word War II had destroyed millions of lives and had challenged older ways of thinking, much rather like the Sybil and Arthur Birling view of the world. World War II had scarred the middle of the century. ...read more.

So he rings the infirmary, no girl has died there today from drinking disinfectant, and they haven't had a suicide case for months. Arthur is so overjoyed at all this that he pours a dink for Gerald and himself. He's so ecstatically happy, he wants to drink to a toast, "Here's to us". At this point Sybil's happy as well. Sheila however is frightened by their behaviour, she wants to "get out of this". As she points out, each of them did do those things. Their behaviour was still bad, whatever it resulted in. Eric argues with her, but Gerald doesn't, he says "Everything's alright now, Sheila", and offers her back the ring. She then states that she needs time to think whether the engagement is back on, "No, not yet. It's too soon." After, the phone rings and Birling answers, it's the police. A girl has just died on the way to the infirmary. She had swallowed some disinfectant, an Inspector is on his way to ask them some questions. Normally at the end of a play everything is sorted out. There are still many questions, who was the Inspector? How did he know about the Girl? Was he real? There's a clear hierarchy of social classes in this play. Many things contribute to where you are in the social scale. Most of it comes down to money. Those who have it, and those who don't. Working class people had all the low status jobs and no money. All the middle class people owned places of work, such as factories or were professionals (like lawyers) and had plenty of money. Upper class people inherited lots of land and money and were often Lords and Ladies. The Birlings and the Crofts were very high up socially. Your class depends on the family which you were born into. The Birlings are clearly a middle class family. ...read more.

The stereotypes get challenged by the girls. Eva/Daisy has something of a rebel in her. Sheila then becomes something of a rebel herself as the evening develops. The two girls break our of the roles that society has allocated for them and become more independent and express their views freely. Eva/Daisy was a "ring leader" of the strike who had "a lot to say". Eva was a "pretty" girl who was "lively" and had "spirit". She questioned the decision of her boss instead of being placid and quiet. Instead of relying on a man to save her, she refused Eric's support and decided to go alone. Sheila is also revealed to be quite a strong young woman during the evening. She interrupts everyone at different times, apart from the Inspector, she challenges her father when she sees the Inspector for the first time, she hands back the engagement ring and then refuses to say whether she'll have Gerald back at the end and she refuses to be called a "child" by her parents. By the end of the play Sheila is stating her own opinions, not those she is "supposed" to have, even to the point of disagreeing with her parents face to face, "That's what's important, and not whether a man is a police Inspector or not", she's learnt to think for herself. An Inspector Calls is a play that doesn't involve religion. This play is like the old morality plays, but it doesn't follow Christian ideas about confession and forgiveness. The moral judge isn't God, it's a police Inspector. Priestley changes the religious background of the morality play and makes it secular. Priestley creates the Inspector to represent the temporal law. At the end, Eric says, "he was our police Inspector all right", and both he and Sheila realize that it doesn't matter whether Goole was a real Inspector or not. The inquisition wasn't a legal one or a religious one - it was a moral one. The younger generation have made progress and Priestley wants to show them that they can be positive agents of change for the future. ...read more.