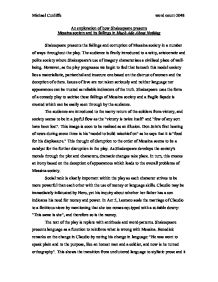 An exploration of how Shakespeare presents Messina society and its failings in Much Ado About Nothing Shakespeare presents the failings and corruption of Messina society in a number of ways throughout the play. The audience is firstly introduced to a witty, aristocratic and polite society where Shakespeare's use of imagery characterises a civilised place of well-being. However, as the play progresses we begin to feel that beneath this model society lies a materialistic, patriarchal and insecure one based on the distrust of women and the deception of others. Issues of love are not taken seriously and neither language nor appearances can be trusted as reliable indicators of the truth. Shakespeare uses the form of a comedy play to satirise these failings of Messina society and a fragile fa�ade is created which can be easily seen through by the audience. The audience are introduced to the merry return of the soldiers from victory, and society seems to be in a joyful flow as the "victory is twice itself" and "few of any sort have been lost". This image is soon to be realised as an illusion. Don John's first hearing of news during scene three is his "model to build mischief on" as he says that it is "food for his displeasure." ...read more.

This could lead to another downfall in the society. Some women such as Hero conform to the behaviour expected of women at the time whilst others rebel against their unequal status in a patriarchal society like Beatrice. Hero is suppressed by the fact that her father chooses who she marries and the lack of speech amongst the males suggests her quiet nature in being a woman. We can see that the males are of higher importance and restrict the female's freedom by their status in Messina. However Beatrice seems to object to the woman's role in the play. This may show a fight against the patriarchal system but in doing so she actually fails and even gives into marriage. Much Ado About Nothing's structure raises many important issues concerning the institution of marriage. Shakespeare reveals the faults of the process of love and marriage through the characters of Hero and Claudio and also Hero's father, Leonato. Claudio quickly falls in love with Hero when returning from the war and asks Benedick "didst thou note the daughter of Signor Leonato?" The use of language by Shakespeare here may suggest that it is only the looks that appeal to the men in Messina, as he falls in love just by viewing her. ...read more.

Lines like "men were deceivers ever" bring about the fact that the deception is a key theme in the play. Deception alters situations and by doing this it shows the overall problems in the society. The masked ball is a great time for deception to thrive. This is the one time when people are supposed to be deceiving, but as Benedick and Beatrice show when insulting each other that the deceptions are obvious. Deception also leads Claudio to believe that Hero was an infidel and obviously this thought results in more trouble. Much Ado About Nothing ends with order restored. The unsatisfactory nature of the alleged comic unity at the end of the play outwardly shows this restoration yet inwardly it shows farcical aspects. Despite these farcical aspects of the play there is a sense of satisfaction as the right couples are with each other yet we don't know how long this unity will last for. So in affect, the actual restoration is just temporary which fits in with Shakespeare's primary ideas of deception and appearances. We can see that the world of Messina is in most ways a flawed society: outwardly merry and tolerant, but concealing stains of patriarchy and inequality; its mistreatment of women, its moral double standards, and its concern with social hierarchy and materialism. ?? ?? ?? ?? Michael Cunliffe word count-2048 ...read more.