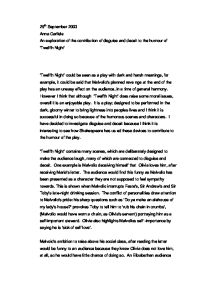 29th September 2003 Anna Carlisle An exploration of the contribution of disguise and deceit to the humour of 'Twelfth Night' 'Twelfth Night' could be seen as a play with dark and harsh meanings, for example, it could be said that Malvolio's planned revenge at the end of the play has an uneasy effect on the audience, in a time of general harmony. However I think that although 'Twelfth Night' does raise some moral issues, overall it is an enjoyable play. It is a play; designed to be performed in the dark, gloomy winter to bring lightness into peoples lives and I think it is successful in doing so because of the humorous scenes and characters. I have decided to investigate disguise and deceit because I think it is interesting to see how Shakespeare has used these devices to contribute to the humour of the play. 'Twelfth Night' contains many scenes, which are deliberately designed to make the audience laugh, many of which are connected to disguise and deceit. One example is Malvolio deceiving himself that Olivia loves him, after receiving Maria's letter. The audience would find this funny as Malvolio has been presented as a character they are not supposed to feel sympathy towards. This is shown when Malvolio interrupts Feste's, Sir Andrew's and Sir Toby's late-night drinking session. The conflict of personalities draw attention to Malvolio's pride: his sharp questions such as 'Do ye make an alehouse of my lady's house?' provokes Toby to tell him to 'rub his chain in crumbs', (Malvolio would have worn a chain, as Olivia's servant) portraying him as a self-important steward. Olivia also highlights Malvolios self-importance by saying he is 'sick of self love'. Malvoio's ambition to raise above his social class, after reading the letter would be funny to an audience because they know Olivia does not love him, at all, so he would have little chance of doing so. ...read more.

invite the audience to picture such a person and contrast it with Sir Andrew! The staging of the duel can heighten the fear Viola and Andrew have of each other and cause great amusement. For example in the production I saw, Viola and Andrew had to be carried by Fabian and Toby in their attempt to try to force them to fight. Unlike other duels in Shakespeare plays, (eg: the duel between Tibolt and Romeo in 'Romeo and Juliet') the audience knows no one is going to get hurt in this scene and can concentrate on the humour instead. The fact that they are fighting for no reason is funny, as the audience knows sir Andrew will never marry Olivia so challenging Cesario to a duel is a waste of time. Also he is competing with someone who will also never marry Olivia, as Cesario is a woman! Sir Andrew and sir Toby are both very comical characters who add to the humour of the play. Sir Toby deceiving sir Andrew that he will marry Oilvia is funny because it shows how idiotic Andrew is: when sir Toby is persuading Andrew to stay, Andrew never questions him and believes his obvious lies: 'She'll not match above her degree, neither in estate, years or wit.' By presenting Sir Andrew alongside sir Toby and Maria, Shakespeare is highlighting his foolishness. He does not understand sir Toby and Maria's wit and has to ask Maria 'What is your metaphor?' The language Sir Andrew uses often invites the audience to feel sorry for him. For example, when Malvolio is reading the forged letter, Sir Andrew simply agrees with everything that sir Toby says and does not give his own opinions. This may make the audience pity his foolishness: 'I could marry this wench for this device' 'So could I too. 'And ask no other dowry with her but such another jest' 'Nor I neither' 'Wilt thou set thy foot o' my neck?' ...read more.

The difference between this humour and the humour the audience experiences with Malvolio and the letter plot is that unlike Malvolio, Olivia hasn't been presented as someone the audience is not supposed to like. For example, she doesn't get angry with Feste calling her a fool for mourning her brother and shows the audience that in contrast to Malvolio, she is prepared to laugh Anna Carlisle at herself and not take everything so seriously. Because of this presentation, the audience is less likely openly laugh at her self-deceit. Another humours situation, involving Olivia's deceit is when she falls in love with Casario. The audience may find it amusing that she has vowed to mourn her brother but then falls in love with the first young 'man' she sees! However this scene is not designed to make the audience laugh as Casario and Olivia talk in rhyming couplets. In general, verse is used for the more serious scenes of the play (scenes involved with love) while prose are used during scenes that are supposed to be funny. (Sir Andrew and sir Toby always talk in prose) The rhymes Viola and Olivia use emphasise the intense feelings they have: 'I love thee so that, maugre all thy pride, Nor wit nor reason can my passion hide' The rhyme brings attention to the fact that Olivia's situation with Orsino has been reversed and she can't hide her feelings: not only is she in love she is pleading to Cesario. The rhyme of 'youth' with 'truth' in Cesrios reply, reminds the audience of Cesarios true gender and draws attention to the humour of the situation- Olivia has fallen in love with a woman: 'by innocence I swear, and by my youth, I have one heart, one bosom, and one truth.' The major theme in Twelfth Night is the love triangle between Viola, Orsino and Olivia. However I think that the comedy, particularly when associated with disguise and deceit, is the most effective device at making the play as enjoyable and memorable as possible. ...read more.