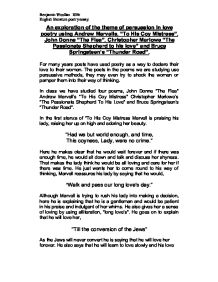 An exploration of the theme of persuasion in love poetry using Andrew Marvells, "To His Coy Mistress", John Donne "The Flea", Christopher Marlowe "The Passionate Shepherd to his love" and Bruce Springsteen's "Thunder Road". For many years poets have used poetry as a way to declare their love to their women. The poets in the poems we are studying use persuasive methods, they may even try to shock the women or pamper them into their way of thinking. In class we have studied four poems, John Donne "The Flea" Andrew Marvell's "To His Coy Mistress" Christopher Marlowe's "The Passionate Shepherd To His Love" and Bruce Springsteen's "Thunder Road". In the first stanza of "To His Coy Mistress Marvell is praising his lady, raising her up on high and adoring her beauty. "Had we but world enough, and time, This coyness, Lady, were no crime." Here he makes clear that he would wait forever and if there was enough time, he would sit down and talk and discuss her shyness. That makes the lady think he would be all loving and care for her if there was time. He just wants her to come round to his way of thinking, Marvell reassures his lady by saying that he would, "Walk and pass our long love's day." ...read more.

He then says that this is more than we would do by saying, "Yet this enjoys before it woo, And pampered swells with one blood made of two, And this, alas, is more than we would do" In the second stanza the he again explores word meanings and here he is begging the lady to not kill the flea (there love for each other) and he explains what the flea (her virginity) means to him, "Oh stay, three lives in one flea spare, Where we almost, nay more than married" Here he uses the word "stay" meaning stop. He then says that they are more than a married couple because they know each other well and that her giving her virginity to him would make then more than a married couple. In her killing the flea it would be three deaths as it has Dunne's blood the woman blood and the murder of the flea itself with killing the flea. "Though use make thee apt to kill me, Let not to this, self murder added be, And sacrilege, three sins in killing three." He thinks that in killing the flea his main point in this argument and he thinks that if she kills the flea he will lose her, to stop her doing this he says that if she kills the flea ...read more.

He tries to tempt her with, "buckles of the purest gold" If she is interested in what he has to offer come and be his love. He really wooing and courting her in a truly old-fashioned way. He is not mentioning marriage he just wants her to love but disguise this with the beautiful things he describes. He finishes in the sixth stanza telling her that shepherds will dance and sing because they will be happy for them. The whole poem conjures up in the readers mind a beautiful, old fashioned and peaceful setting. This I feel was the most effective poem and would be the one I would use to try and win my lady over. This poem describes strenuous tasks and makes them sound effort less. He managed to fool the lady into not thinking about marriage but just on loving him this is very clever as this is not as full on as "The flea" or "Thunder Road" Although that worked in its own way being honest and truthful telling the lady what she is going to get or leave it. All four poets had there own separate way of talking their lady into their way of thinking by using wit, surprise, honesty or by raising the lady on a pedal stool. Each technique worked in its own way. Benjamin Woollan 10Br English literature poetry essay. ...read more.