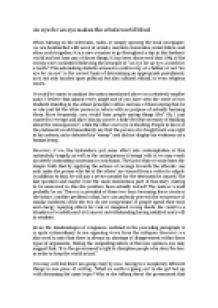 An eye for an eye makes the whole world blind

﻿An eye for an eye makes the whole world blind When turning on the television, radio, or simply opening the local newspaper, we are bombarded with news of arrests, murders, homicides, serial killers, and other such tragedies. It is a rare occasion to go throughout a day in this barbaric world and not hear any of these things. It has been discovered that 10% of the crimes were committed following the principle of ?An eye for an eye, a tooth for a tooth.? This astonishing statistic aroused a controversy of whether or not ?An eye for an eye? is the correct basis of determining an appropriate punishment, as it not only touches upon political, but also cultural, ethical, or even religious issues. It would be easier to analyze the notion mentioned above on a relatively smaller scale. I believe that almost every single one of you have seen the scene of two students standing in the school principle?s office, and one of them saying that he or she just hit the other person in return with no purpose of actually harming them. More frequently, you would hear people saying things like? Oh, I just wanted to revenge and show him my power. ...read more.

Hence, a murderer should have his life taken from him. This kind of perverse logic, which has seldom been supported by the victims' families themselves, fails to be convincing. In a similar vein, several other questions regarding the effect on society, ?restitution being denied, the rights of the convicted, and the possibility of the innocent being accused?, are not addressed convincingly by supporters of capital punishment. How often do we hear on the television that a handful of evidence from a strong lawyer could condemn someone to death for simply walking down the wrong street on the wrong day and at the wrong time? The potential for such miscarriage of justice, in my opinion, cannot be conquered. According to the news-reporter of CCTV channel, 5% of people that were served death penalties are either innocent or at least partly innocent. Moreover, ?life is a precious gift from God. Even when a person has no material possessions, life is still possessed.? In light of this quotation, it is logical to assume that a murder, the taking of another's life, is the most heinous of crimes for any reason. In the face of such arguments, the proponents have responded to in a number of ways. ...read more.

When Gandhi warns us of the dangers of an eye for an eye, he tells us that there will never be an end to violence as long as there is someone who always provokes it. And his method was proved to be successful in defeating the British. The action retaliation bears a resemblance to domino effect, where one event causes a series of similar events to take place one after the other. The reality forces us to consider whether to take revenge. In retrospect, I strongly recommend all of us to actually ponder about the disadvantages of taking revenge. The images of the whole world being blind are reappearing inside me constantly, as I am finishing off this article. Instead of turning yourself from a victim to a sinner, make an attempt to compromise by mutually understanding the ?potential offender?. It might turn out to be that the person who hit your hand did not do it on purpose, or even if he did it deliberately, do not take revenge, as you will be harmed and punished as well. We have a model leader, Gandhi, who succeeded without committing anything gruesome or violent. In the end, I would also state my opinion that the death penalty should be banned as it follows the principle of life for life. ...read more.