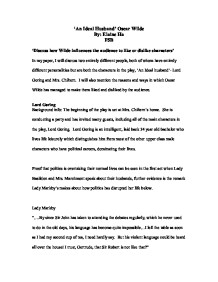 'An Ideal Husband' Oscar Wilde By: Elaine Ha F5B 'Discuss how Wilde influences the audience to like or dislike characters' In my paper, I will discuss two entirely different people, both of whom have entirely different personalities but are both the characters in the play, 'An Ideal husband'- Lord Goring and Mrs. Chiltern. I will also mention the reasons and ways in which Oscar Wilde has managed to make them liked and disliked by the audience. Lord Goring Background info: The beginning of the play is set at Mrs. Chiltern's home. She is conducting a party and has invited many guests, including all of the main characters in the play, Lord Goring. Lord Goring is an intelligent, laid back 34 year old bachelor who lives life leisurely which distinguishes him from most of the other upper class male characters who have political careers, dominating their lives. Proof that politics is overtaking their normal lives can be seen in the first act when Lady Basildon and Mrs. Marchmont speak about their husbands, further evidence is the remark Lady Markby's makes about how politics has disrupted her life below. ...read more.

Chevelry) his personality changes into becoming serious. By doing this, Oscar Wilde influences the audience to like Lord Goring because although he a comical laid back person, when his friend is in trouble, he will change his character to become what his friend needs, some one serious who understands. However, the main reason why Lord Goring is still liked although he has turned serious is because this fact is greatly overshadowed by the fact that the change in personality is due to him being a loyal friend and attempting to help solve Robert Chiltern's problem. Even, when Lord Goring makes the problem worse and Robert Chiltern thinks of him as a traitor, the audience already knows his innocence and pities him, while laughing at the situation that has occurred. (Lord Goring thinks that it is Mrs. Chiltern who has come to see him, but actually it is Mrs. Chevelry, in the next room who has been listening in on Robert Chiltern and Lord Goring's conversation. Robert finds Mrs. Chevelry and is extremely angry, then leaves, while Lord Goring, still not realizing the person is actually Mrs. ...read more.

In Act I page 48, when Robert Chiltern realizes the position he is in, he asks his wife to love him always. Her response was that she would love him only because he was worthy of love. Due to this, even after Lady Chiltern is given the biggest shock of her life, her ideal dreams suddenly shattering, and then immediately scolded and critized by her husband Robert Chiltern with his brilliant truthful speech on how women always make ideals of men, the audience can no longer feel no remorse for her as Lady Chiltern sways side to side. Pity is felt for Robert Chiltern, living with a wife believing that her husband was the most perfect person in the world and only loving him because of this. Although the end is a happy one, at the end, when she agrees with Robert that he should resign from the offer of having a cabinet seat, even Lord Goring proves to know more about life and her husband than she does, telling her that rather than lose her love, Robert Chiltern would agree to anything. And so again, she is portrayed negatively. ...read more.