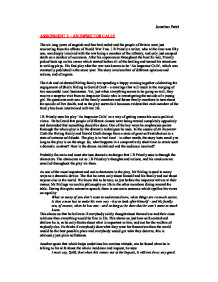 Jonathan Patel ASSIGNMENT 3 - AN INPSECTOR CALLS The six long years of anguish and fear had ended and the people of Britain were just recovering from the effects of World War Two. J.B Priestly a writer, who at the time was fifty one, was deeply involved with the war being a member of the infantry, and only just escaped death on a number of occasions. After his experiences throughout the horrific war, Priestly picked back up on his career which started before all of the battling and turned his attentions to writing plays. His first play after the war was known to be 'An Inspector Calls', which was eventually published in the same year. The story involves that of different opinions and actions, and of regrets. The rich and celebrated Birling family are spending a happy evening together celebrating the engagement of Sheila Birling to Gerald Croft - a marriage that will result in the merging of two successful local businesses. Yet, just when everything seems to be going so well, they receive a surprise visit from an Inspector Goole who is investigating the suicide of a young girl. He questions each one of the family members and future family members in turn about the suicide of Eva Smith, and as the play unravels it becomes evident that each member of the family has been intertwined with her life. J.B Priestly uses his play 'An Inspector Calls' as a way of getting across his socio-political views. He believed that people of different classes were being treated completely oppositely and demanded that something should be done. One of the key ways he emphasises points thorough the whole play is by the dramatic techniques he uses. In the course of An Inspector Calls the Birling family and Gerald Croft change from a state of great self-satisfaction to a state of extreme self-doubt. The play is in 'real time' - in other words, the story lasts exactly as long as the play is on the stage. ...read more.

Although there are aspects of Mr Birling's personality he is also willing to accept responsibility for Eva's death and is upset by what he has helped cause. He feels guilty but does not like to convey his emotions. We know he feels guilty as he asks the inspector if he may be alone for a while and tells the inspector that he was: Rather more upset by this business than I probably appear to be. This shows us that he was upset and hurt by what he believed he had done to Eva Smith (Daisy Renton) and felt guilty, yet at the same time didn't want to admit his involvement. He is a mixture of both the older and younger Birlings. Like Eric and Sheila as he is willing to accept and admit responsibly for Eva's death and is upset by what he help happen. But he is a capitalist like Mr Birling and believed that a man has a right to become wealthy at the cost of others. Probably more important, as with Mr and Mrs Birling, his ending gives him away and his attitude at the end is that since no girl has actually died, then nothing that he has done really matters. This shows us that he didn't learn anything and was more bothered about appearances. J.B Priestley uses this character to tell the audience even the growing up rich people still had vein and image driven sides. He uses Gerald as an example of how people can seem one thing and actually be another. Gerald is not a complete individual and J.B Priestley makes great use of this fact. He ensures that Gerald is stuck between two different types of people and this makes the audience understand what problems some richer people face. The youngest member of the family is Eric, who like Sheila, is in his early twenties. We are told in the opening notes that he is: Not quite at ease, half shy, half assertive unlike Gerald who is quite self-confident. ...read more.

Thorough the play, we realise about Priestley's views and opinions mainly through the character of Inspector Goole. It could be said that Priestly was Goole but in a different era and context. Most of the ideas and philosophies that come from the inspector, Priestly felt himself and this is none more so obvious than in his last speech: Just remember this. One Eva Smith has gone - but there are millions and millions and millions of Eva Smith's and John Smith's still left with us, with their lives, their hopes and fears, their sufferings and chance of happiness, all intertwined with our lives, and what we think and say and do. We don't live alone. We are members of one body. We are responsible for each other. And I tell you that the time will soon come when, if men will not learn that lesson, then they will be taught it in fire and blood and anguish. This last speech from the inspector in the play is one of most obvious examples of when Priestley is speaking through the inspector. We know from this that Priestley believes everybody helps each other and that we all play different parts in other peoples lives. This idea from Priestly contradicts that of the belief of Mr Birling, who believes we should only look after ourselves and family. The fact that in the end of the play Mr Birling has not learnt anything and that he, in context, looses the "battle" appeals to the audience that Birling's philosophy is wrong and the inspectors - Priestley's - is right. The actual dramatic effects are very successful and get across the right views that the writer wanted. The strongest dramatic effect is probably the characters as they appeal to the audience more as they can relate to what they believe. His aims for the play to decrease inequalities and he made his points very clear and achieved his aims well. The audience will pay attention to what he is saying and take to note the message. ...read more.