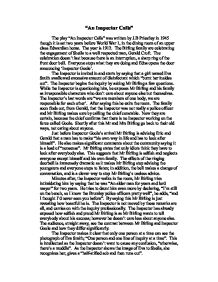 The play “An Inspector Calls” was written by J.B Priestley in 1945 though it is set two years before World War 1, in the dining room of an upper class Edwardian home.  The year is 1912.  The Birling family are celebrating the engagement of Sheila to a well respected man, Gerald Croft.  The celebration doesn’t last because there is an interruption, a sharp ring of the front door bell.  Everyone stops what they are doing and Edna opens the door announcing ‘Inspector Goole’.

The Inspector is invited in and starts by saying that a girl named Eva Smith swallowed excessive amount of disinfectant which “burnt her insides out”.  The Inspector begins the inquiry by asking Mr Birling a few questions.  While the Inspector is questioning him, he exposes Mr Birling and his family as irresponsible characters who don’t care about anyone else but themselves.  The Inspector’s last words are “we are members of one body, we are responsible for each other’.  After saying this he exits the room.  The family soon finds out, from Gerald, that the Inspector was not really a police officer and Mr Birling makes sure by calling the chief constable.  Now they are certain, because the chief confirms that there is no Inspector working on the force called Goole.  Shortly after this Mr and Mrs Birling go back to their old ways, not caring about anyone.

Just before Inspector Goole’s arrival Mr Birling is advising Eric and Gerald that a man has to make “his own way in life and has to look after himself”.  He also makes significant comments about the community saying it is a load of “nonsense”.  Mr Birling states that only idiots think they have to look after everybody else.  This suggests that Mr Birling is selfish and neglects everyone except himself and his own family.  The effects of the ringing doorbell is immensely dramatic as it makes Mr Birling stop advising the youngsters and everyone stops to listen; in addition, the bell makes a change of conversation, and is a clever way to stop Mr Birling’s useless advice.

Minutes after, the Inspector walks in the room, Mr Birling tries intimidating him by saying that he was “An alder man for years and lord mayor” for two years.  He tries to daunt him even more by declaring, “I’m still on the bench, so I know the Brumley police officers pretty well”, he adds, “and I thought I’d never seen you before”.  By saying this Mr Birling is just revealing how boastful he is.  The Inspector is not moved by these remarks are all, and carries on with the inquiry professionally.  The Inspector has already exposed how selfish and proud Mr Birling is as Mr Birling wants to tell everybody about his success; however he doesn’t care less about anyone else.  The audience, straight away, see the contrast between Mr Birling and Inspector Goole and how they differ significantly.

The Inspector makes it clear that only one person at a time can see the photograph of Eva Smith; “One person and one line of inquiry at a time”.  This is intellectual as the Inspector doesn’t want to cause any confusion, “otherwise, there’s a muddle”.  As the Inspector shows the image of Eva to Sheila, she recognizes her, gives a “half-stifled sob and then runs out”.

Sheila’s intense exit has a great impact on the audience.  They would probably know why she left, maybe she knows who Eva Smith is and they argued before her death, or maybe they were just friends.  This would keep the audience thinking and wanting to read more as they would be interested in Sheila re-entering the room.

The distinction between Mr Birling’s comments, just before the arrival of Inspector Goole, and the Inspector’s remarks, just before his departure, is incredible.  The inspector said “we are members of one boy. We are responsible for each other”, but on the other hand Birling’s comment was the total opposite; “the way some of these cranks talk and write now, you’d think everybody has to look after everybody else”.  These two comments show the diversity of these two people.  Mr Birling, a capitalist and Inspector Goole is clearly a socialist.  Two extremely different people; one is wise and one is just a fool.

The warnings Inspector Goole issues are, “If men will not learn that lesson, then they will be taught it in fire and blood and anguish”.  The Inspector is trying to help the Birlings by warning them to change just before it is too late, but he has hardly any impact on them as they return to their irresponsible selves.  However, their children – Sheila and Eric – acknowledge this and become better people than their parents.

In conclusion, the lesson Inspector Goole is attempting to teach Mr and Mrs Birling and Gerald is to stop being selfish and irresponsible.  The warning Inspector Goole delivers are clear and evident to all; the audience Eric and Sheila, except the Birlings and Gerald because shortly after Inspector Goole’s departure the Birlings and Gerald return to their old way; neglecting and uncaring ways.  The entrances and exits are significant moments in the drama as they cause tension and suspense amongst the audience which mystifies them and sustains their engagement in the drama.