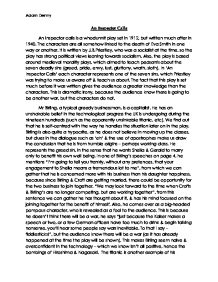 An Inspector Calls An inspector calls is a whodunnit play set in 1912, but written much after in 1940. The characters are all somehow linked to the death of Eva Smith in one way or another. It is written by J.B.Priestley, who was a socialist at the time, so the play has strong political views leaning towards socialism. Also, the play is based around medieval morality plays, which aimed to teach peasants about the seven deadly sins (greed, pride, envy, lust, gluttony, wrath, sloth). In 'An Inspector Calls' each character represents one of the seven sins, which Priestley was trying to make us aware off & teach us about. The fact that this play is set much before it was written gives the audience a greater knowledge than the characters. This is dramatic irony, because the audience know there is going to be another war, but the characters do not. Mr Birling, a typical greedy businessman, is a capitalist. He has an unshakable belief in the technological progress the UK is undergoing during the nineteen hundreds (such as the apparently unsinkable titanic, etc). We find out that he is self-centred with the way he handles the situation later on in the play. Birling is also quite a hypocrite, as he does not believe in moving up the classes, but clues in the dialogue such as 'eh' & the use of apostrophes make us draw the conclusion that he is from humble origins - perhaps working class. He represents the greed sin, in the sense that he wants Sheila & Gerald to marry only to benefit his own well being. ...read more.

But we can tell Sheila isn't so easily fooled because she comments "Except for all last summer, when you never came near me & I had wondered what had happened to you", implying she knows something was up, which will be revealed to her later on in the play. Gerald's manipulative natures sees him using Eva as a play thing, to get what he wants when he is bored. "It's a favourite haunt of women of the town..." shows Gerald is a bit seedy, retreating to a bar because he had a 'long dull day' & 'the show wasn't very bright', and shows he is easily bored & craves womanly company to brighten up his life. This is how Gerald becomes involved with Eva. He says "I want you to understand that I didn't install her there so that I could make love to her", which shows Gerald's sensitive side, as he is trying to calm the hype surrounding the new found out affair down. Gerald also comes from upper middle class backgrounds, because his parents have the titles 'Sir George' & 'Lady Croft', which means he could come from aristocratic origins, therefore Mr & Mrs Birling are out to impress him, trying to give off the right impression. Eric, the young lad, represents gluttony as he is a very heavy drinker. His parents aren't aware of Eric obvious drinking problem but Gerald is, he says "I have never seen much of him outside this house but, I have gathered he's a pretty heavy drinker", therefore we can accuse Eric of representing gluttony. ...read more.

This play is traditional in the sense of an early 19th century play. At the start, the 4 Birlings are seated at the table, with Mr Birling sat at the top end & Mrs Birling sat on the bottom. This shows the control + power the head of the house (the male) has over his family/wife. Also, Mr Birling tries to hide his beloved wife from the shock of Eric admitting what he did with Eva. Birling sharply says "Sheila, take your mother along to be drawing-room-", this be could be a protection of the woman in the family, which is a chivalrous act from Birling. Socialism is the main theme of this play. Priestley expresses his feelings throughout the acts of the inspector. He says "because what happened to her then may have determined what happened to her afterwards. A chain of events", which is a socialist principle, as they believe in responsibility of others. The inspector uses some powerful religious imagery straight before he leaves the Birling house. "Their hopes and fears, their suffering and chance of happiness, all intertwined with our lives and what we think and say and do", this quote from the inspector forces the audience to think about the responsibility everyone has - a socialist view. He says "we are member of one body", which refers to Christ's body in a communion, where people will eat bread (Christ's body) & drink wine (Christ's blood). Overall, Priestley's aim to show his personal views are represent well throughout the use of the inspector himself & the dramatic devices. Particularly dramatic irony which is used a great deal in this play. ?? ?? ?? ?? Adam Denny ...read more.