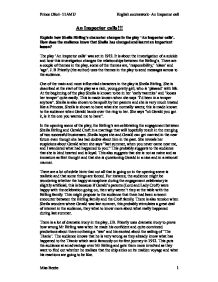 An Inspector calls!!! Explain how Sheila Birling's character changes in the play 'An inspector calls'. How does the audience know that Sheila has changed and learnt an important lesson? The play 'An inspector calls' was set in 1912. It is about the investigation of a suicide and how this investigation changes the relationships between the Birling's. There are a couple of themes in the play, some of the themes are, 'responsibility,' 'class' and 'age'. J. B Priestly (the author) uses the themes in the play to send messages across to the audience. One of the main and most influential characters in the play is Sheila Birling. She is described at the start of the play as a rich, young pretty girl, who is 'pleased' with life. At the beginning of the play Sheila is known to be in her 'early twenties' and 'looses her temper' quite easily. This is made known when she says 'I'd been in a temper anyhow'. Sheila is also shown to be spoilt by her parents and she is very much treated like a Princess. Sheila is shown to have what she normally wants; this is made known to the audience when Gerald hands over the ring to her. She says "oh Gerald you got it, is it the one you wanted me to have". ...read more.

She in turn very passionate speaks against her family about the night's occurrence and tells them that 'probably between us, we killed her'. This is a very strong case as she is claiming that the whole household had killed a girl in a long chain of incidents. Yet her parents are still reluctant to accept any blame for what has happened. Class is one of the main themes in the play. There were two different classed citizens back in the early 1900's. These were the lower class citizens and the higher class citizens, the Birling's and the 'Croft's' belonged to the higher class citizens. The play is mostly based on a maltreatment of a lower class citizen and how this leads to the change in her life. Mr. Birling was expecting a 'Knighthood', due to his involvement in the local community, so warns Gerald to keep out of 'trouble' until he gets his accolade. Apart from 'Edna' the maid, there were no other lower class citizens acting in the play. We only see the rich (the crofts) and the upwardly coming rich (the Birling's) but yet we learn a lot about the lower class citizens as we hear of each stage in Eva's life and we see the attitudes in which the Birling's had acted on her. ...read more.

Responsibility is one of the things in which the characters in the play often referred to....... Now that all the Birling's know that they are all involved, and played a part in Eva smith's death, some of the characters start idolising themselves from the situation, the main culprit of this is Mr. Birling. Sheila is the only one who really understands what has happened and has learnt anything from the situation. Mr and Mrs Birling are concerned about what is going to happen to them rather than the tragedy that has just occurred to them. They are also more concerned about covering themselves up; whiles on the other hand Sheila and Eric are accepting their involvements and are feeling guilty. After the Inspector leaves, the family begin to ponder what has just happened and how they make the situation better. But yet Sheila still Sheila knocks off her parents for trying to protect themselves, she says that 'I behaved badly too, I am ashamed of it, but now you are beginning all over again to pretend that nothing much has happened". This suggests that even though she is ashamed of her actions, she can't live like how she did in the past. This proves to the audience that she is maturing. ?? ?? ?? ?? Prince Ofori- 11AMU English coursework- An Inspector call 1 Miss Beebe ...read more.