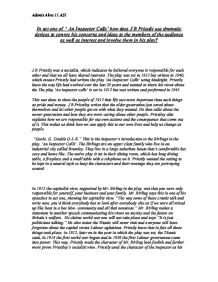 In act one of ' An Inspector Calls' how does J B Priestly use dramatic devices to convey his concerns and ideas to the members of the audience as well as interest and involve them in his play? J B Priestly was a socialist, which indicates he believed everyone is responsible for each other and that we all have shared interests. The play was set in 1912 but written in 1940, which means Priestly had written the play 'An Inspector Calls' using hindsight. Priestly knew the way life had evolved over the last 28 years and wanted to share his views about the The play 'An inspector calls' is set in 1912 but was written and performed in 1945. This was done to show the people of 1912 that life was more important than such things as pride and money. J B Priestley writes that the older generation just cared about themselves and let other people get on with what they wanted. He then talks about the newer generation and how they are more caring about other people. Priestley also explains how we are responsible for out own actions and the consequence that come out of it. This makes us think how we can apply this to our own lives and help us change as people. ...read more.

Priestly uses the character of Shelia to represent all of the impressionable young girls in 1912. Whereas Gerald Croft is 'an attractive chap of about 30.' Mr. and Mrs. Birling are 'well off business people' and Eric, their youngest boy, is 'a young man in his early twenties, not quite at ease, half shy, half assertive.' The group are all very pleased with themselves and are happily celebrating Shelia and Gerald's engagement, not knowing that everything was about to change. The Birlings and Gerald's celebration was interrupted by the dramatic device of the sound of the doorbell. Mr. Birling was in full flow of one of his many capitalist speeches in act one, when the sound of the doorbell pierces through the house, and the Inspector has arrived. The stage directions say, 'we hear the sharp ring of the front doorbell. Birling stops to listen.' Eric then continues, "Somebody's at the front door". After a few moments of talking Edna, the housekeeper, enters with the Inspector, saying "Please sir, an Inspectors called". The arrival of the inspector is of course significant, because firstly, the Inspector breaks off Mr. Birling's speech about how "you are only responsible for yours, your own and your business" and about "... ...read more.

The Inspector leaves Gerald and Shelia alone together after startling Gerald by bringing up the name 'Daisy Renton' which Gerald obviously recognizes. Gerald later confesses to Shelia his involvements with Daisy. Inspector Goole then re-enters and demands an explanation from Gerald with a sharp "well?" This is a rhetorical question as we, the audience, have just heard the confession. However we as the audience want to know what happens next. The play is structured for dramatic effect with the entire action taking place in the Birling's dining room. All the events happening off stage e.g. the strike, sacking of Eva Smith and the interview of Eva with Mrs. Birling. In conclusion, J B Priestly uses many dramatic devices to express his socialist point of view. He clearly changes our opinion of the Birling's from act one. In the stage directions in act one; it states that the Birlings have good solid furniture and a three-course meal, which indicates that they are a respectable family. By the end of act one the Birlings high-class reputation to the audience has dissolved. Priestly withholds information from you which makes you want to read on, as you are aware there is more to come. Priestly's message of cause and effect, how one person's actions affect another's, is the moral of the play. Priestly wanted to demonstrate the values of life to the people the Birling family represent. ?? ?? ?? ?? Adonis Akra 11.AS1 ...read more.