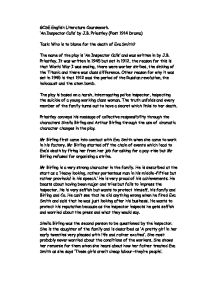 GCSE English Literature Coursework. 'An Inspector Calls' by J.B. Priestley (Post 1914 Drama) Task: Who is to blame for the death of Eva Smith? The name of the play is 'An Inspector Calls' and was written in by J.B. Priestley. It was written in 1945 but set in 1912, the reason for this is that World War I was ending, there were worker strikes, the sinking of the Titanic and there was class difference. Other reason for why it was set in 1945 is that 1912 was the period of the Russian revolution, the holocaust and the atom bomb. The play is based on a harsh, interrogating police inspector, inspecting the suicide of a young working class woman. The truth unfolds and every member of the family turns out to have a secret which links to her death. Priestley conveys his message of collective responsibility through the characters Sheila Birling and Arthur Birling through the use of dramatic character changes in the play. Mr Birling first came into contact with Eva Smith when she came to work in his factory. Mr Birling started off the chain of events which lead to Eva's death by firing her from her job for asking for a pay-rise but Mr Birling refused for organising a strike. ...read more.

Gerald's involvement in Eva Smith or as known Daisy Renton was a short-term romance. It all started when Gerald spotted her at a bar being harassed by a drunken man. Gerald became acquainted with her in his concern he offers her a flat to live in for the time. He gave Eva/Daisy everything she could have wanted at that point, a home, food and money/ Gerald could be seen as a user by stringing her along but he did provide her with happiness for a long time. The relationship could have done some good for Eva/Daisy. Gerald felt upset at the news of Eva/Daisy's death. He cared for her and felt guilty when knew who she was. I fell that Gerald is only partly to blame; however he is more to blame than Sheila as he seemed to care for her even more when he learns that he knew her. He fails to care after he finds out that Eva/Daisy did not really die, instead of feeling guilty for what he had done to her. After Eva/Daisy met Gerald, she then met Eric Birling who was single. He is described as "in his early twenties, not quite at ease, half shy and half assertive". He seems quite embarrassed and awkward from the start. ...read more.

She remains cold and stone-faced even when every other member of the family has been accused and has accepted the blame she sees Sheila as immature and na�ve throughout the play as she constantly puts her down telling her to stop being a hysterical young girl. My main reason for thinking that Mrs Birling is responsible is because not only was she the last step before Eva/ Daisy ended her life but because in my eyes she was the most powerful one. Eva/ Daisy was at a time where she was most emotional and she must have been feeling desperate as her life had progressed in a downward spiral ever since she lost her job fighting for what she believed in. However she got through, determined to keep herself going instead of living off nothing. When she brought her case to Mrs Birling's attention, she didn't expect a miracle but she did expect a little bit of help. When Mrs Birling refused Eva/ Daisy she must have felt that was her last chance gone. Eva had pushed all the bottoms she could to any life improvements and felt she had no other option but to end her life which to her was an on going misery. Mrs Birling carried out her actions with no thought to what effect it would have on Eva and continued to deny her mistake after her death for these reasons I feel that if anyone is guilty then it is Mrs Birling. ...read more.