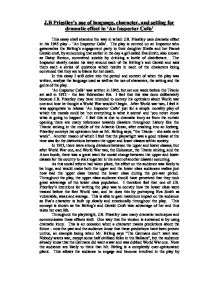 J.B Priestley's use of language, character, and setting for dramatic effect in 'An Inspector Calls' This essay shall examine the way in which J.B. Priestley uses dramatic effect in his 1945 play - 'An Inspector Calls'. The play is centred on an Inspector who gatecrashes the Birling's engagement party to their daughter Sheila and her Fianc� Gerald croft, by announcing that earlier in the day a girl called Eva Smith, also known as Daisy Renton, committed suicide by drinking a bottle of disinfectant. The Inspector slowly makes his way around each of the Birling's and Gerald and asks them each a series of questions which results in each of the characters being convinced that they are to blame for her death. In this essay I will delve into the period and context of when the play was written, analyse the language used as well as the use of characters, the setting and the genre of the play. 'An Inspector Calls' was written in 1945, but set one week before the Titanic set sail in 1912 - the late Edwardian Era. I feel that this was done deliberately because J.B. Priestley may have intended to convey his optimism about World war one and how he thought a World War wouldn't begin. After World war two, I feel it was appropriate to release 'An Inspector Calls' just for a simple morality play of which the morals could be 'not everything is what it seems' and 'you never know what is going to happen'. I feel this is due to dramatic irony as from the curtain opening there are many references towards disasters throughout history like the Titanic sinking in the middle of the Atlantic Ocean, after crashing into an Iceberg. Priestley conveys his optimism here as Mr. Birling says; "the Titanic - she sails next week". Another reason of which I feel that the playwright was a good release at the time was for the distinctions between the upper and lower classes within society. ...read more.

What an idiot!" Two examples of this dramatic irony are when Mr Birling makes the quotes about the war "I say there isn't a chance of war" and the Titanic; "the Titanic - she sails next week ... and unsinkable, absolutely unsinkable". This quote leads me to believe that he's too pessimistic about the world around him, and leads the audience to think that his head's too far up in the clouds and he believes anything that he's told. This is adding towards character development, as it shows that Mr. Birling is quite na�ve. It's necessary to have this use of language to develop the characters social status within the play. Although Mr. Birling would disagree with me, I feel that he and his family are of Middle class status, as he has a business that has only been open for a minority of years, and at the beginning of the show, Mr. Birling is confident in himself, as he says sentences about himself and his business like the following; "and I speak as a hard-headed business man", however in great comparison, the Croft's business has been open for centuries, and therefore this leads me to the conclusion that the Croft's are of a high social status. This leaves no question of why Mr. Birling is happy about tonight, as he assumes that the Croft's will work together with the Birling's as he feels that they will be family - "and perhaps we may look forward to the time when Croft's and Birling's are no longer competing but working together" I also feel that the use of language used is necessary by means of retaining authenticity. The language is therefore significant to both the effects on characters, and the audience. The effects on the characters will be varying from character to character, for example the use of language used by the Inspector may be harsh and impolite in Mr. ...read more.

I therefore feel that this play is good in terms of the genre and the setting within the play. I feel that J.B. Priestley has used the correct media type in a play, as the audience build up an affinity with each of the characters (especially Eva - though she's not directly involved in the play), as they are seeing it being made more dramatic by terms of acting - which wouldn't be as effective if it were portrayed in a novel or poem. This is definitely meant to be performed for an audience. Having written this essay I feel that J.B Priestley's use of language, character, and setting for dramatic effect is used fantastically. The use of language contributes towards the effectiveness of the play by developing the characters in ways that you'll either love them or hate them - there's no middle ground. The language used also compliments the play in traditions that it considers the time and era that it was set in, therefore not using modernised slang, but colloquial terms, and terms used in the early twentieth century. The use of character is also very reliant upon the language, but without one of them - there's no play. The setting also compliments the play's era "It has good solid furniture of the period. The general effect is substantial and comfortable, but not cosy and homelike". This presents the impression that the family will be somewhat of the upper class, and out to do well in life. It also brings about the concept that their home is used mainly for business meetings. From the beginning of the play, I feel that two morals make up the play, one being 'not everything's as it seems', and the other being 'don't judge a book by it's cover'. I feel that the first moral is reasonable because the Titanic may seem unsinkable to Mr. Birling, but the audience know that the Titanic has already sunk. J.B. ...read more.