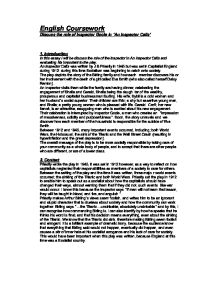 Discuss the role of Inspector Goole in ‘An Inspector Calls’

In this essay I will be discuss the role of the inspector in An Inspector Calls and evaluating his important to the play.

An Inspector Calls was written by J.B Priestly in 1945 but was set in Capitalist England during 1912  during this time Socialism was beginning to catch onto society.

The play depicts the story of the Birling family and how each member discovers his or her involvement with the death of a girl called Eva Smith (who also called herself Daisy Renton).

An Inspector visits them while the family are having dinner, celebrating the engagement of Sheila and Gerald, Sheila being the daughter of the wealthy, prosperous and capitalist businessman Burling. His wife, Sybil is a cold woman and her husband’s social superior. Their children are Eric; a shy but assertive young man, and Sheila; a pretty young woman who is pleased with life. Gerald Croft, her new fiancé, is an attractive, easygoing man who is excited about his new engagement.

Their celebration is interrupted by Inspector Goole, a man who creates an “impression of massiveness, solidity and purposefulness”. Soon, the story unravels and we discover how each member of the household is responsible for the suicide of Eva Smith.

Between 1912 and 1945, many important events occurred, including; both World Wars, the Holocaust, the sink of the Titanic and the Wall Street Crash (resulting in hyperinflation and the great depression).

The overall message of the play is to be more socially responsible by taking care of your community as a whole body of people, and to accept that there are other people who are different, or are of a lower class.

Priestly wrote the play in 1945, it was set in 1912 however, as a way to reflect on how capitalists neglected their responsibilities as members of a society to care for others. Between the setting of the play and the time it was written, three major world events occurred; the sinking of the Titanic and both World Wars. Priestly set the play in 1912 to enable him to speak out as a socialist about how the capitalists should have changed their ways, almost warning them that if they did not, such events like war would occur. I know this because the inspector says “if men will not learn that lesson, they will be taught in blood, and fire, and anguish”.

Priestly makes Arthur Birling’s views seem foolish, and writes him to be an ignorant and stupid character that is clueless about society and how the community can work together. Birling says “…the Titanic…unsinkable, absolutely unsinkable” and by this, I can recognise how commanding Birling is. I can also identify by how he speaks that he thinks his word is final, and that his decision means everything, even about the sinking of the Titanic. We know that the Titanic did sink, therefore making Birling seem foolish and arrogant. It is a brilliant example of dramatic irony, because the audience know that everything that Birling said would not happen, eventually did happen, and even causes a stir of inner hate at his socialist arrogance and his lack of care for society. This would have been important when this play was written, because England at this time was a Socialist country.

We can tell from the stage directions on page eleven that the inspector gives an “impression of massiveness, solidity and purposefulness”. By directing the Inspector to seem purposeful, the audience begin questioning his true role in the play - is he more important than just a police inspector? What exactly does he represent?

We question this because of his behaviour towards the family; any traditional or ‘normal’ inspector of the time would’ve been empathetic towards the Birling’s situation and may have been capitalist too.

When addressing people, the inspector stares them down and they begin explaining their encounter with Eva Smith. He has a “disconcerting habit of looking hard at the person he addresses before actually speaking”. This could scare or worry the family members into unfolding the story of how they all played a part in Eva Smith’s death. Either that or maybe his purposefulness may exist only in his gaze, which he uses to unravel the story to the family.

The stage directions show the inspector’s authority with simple phrases like “cuting in, with authority”. This implies his voice is the most important, he is speaking out for the dead girl and needs to be heard above the family. This also has a political context; the socialists, who at the time the play was set, were only just getting any kind of authority. Also, as this play represents, socialists grew a voice and soon were beginning to be heard above the capitalists.

Birling makes a strongly capitalist speech about how people should look after themselves and that society doesn’t matter. He says “community...and all that nonsense.” This is a perfect example of how Birling views the community as unnecessary and stupid. He deeply believes that a man should look after himself and his own, and he shows no empathy for the dead girl. Also, Birling’s focus in life is his money and class, which relates to capitalism.

Birling’s speech is interrupted by the family’s maid, Edna, who introduces the Inspector. Birling welcomes him but immediately becomes defensive and boastful. The Inspector, however, is not phased. The emphasis on the Inspector’s determination and confidence shows how in control he is. He hushes the family so he can speak by “cutting in massively”, another portrayal of how commanding he is and his authority over the family.

This is also represented by his knowledge, and the way he unnerves Sheila and Eric with his understanding of the whole situation. After leaving the room during Sheila and Gerald’s talk, the Inspector asks “Well?, showing the audience he already knows about Gerald’s affair to Daisy Renton.

During his enquiries, the Inspector remains entirely in control; at times, he is able to “massively take charge”. Sheila regards him “wonderingly and dubiously”, later she realises no-one told him anything that he didn’t already know. Through his creation of the powerful, all-knowing nature of the character of the Inspector, and through the revelation of the incredible but very real chain of events in which every character is involved, Priestly successfully moves his audience beyond the bounds of naturalism. It is the unreal quality of the Inspector and his final prophecy of “fire and blood and anguish” - referring to World War One which would start only two years after this play was set - that successfully imbues the Inspector with an almost supernatural intelligence.

To the Inspector, Eva Smith represents all the ‘lower class’ socialists of the time. The surname ‘Smith’ was very common at this time, again representing a vast quantity of people who were finding working life difficult. It is this that again makes us question the Inspector’s existence - was he simply a voice for the lower, working class citizens of England? He says “there are millions and millions of Eva Smiths and John Smiths still left with us…intertwines with our lives”. He is explaining that by the family realising the consequences of their actions towards Eva Smith, they should reform themselves and treat everyone with respect.

The Inspector’s timing is almost perfect, both upon arrival and when leaving. He arrives during Birling’s capitalist speech, representing how socialism would soon overpower capitalism. Also, the lighting changes, emphasising the Inspector’s important and authority in the play. The Inspector leaves at the end of his speech, which of course completely contrasts with what Birling was talking about in the beginning. The Inspector leaves just before Gerald’s return, who explains t the family that Inspector Goole is not a real inspector. This magnifies the Inspector’s mysterious character and leaves the family and the audience questioning his existence and purpose in the play.