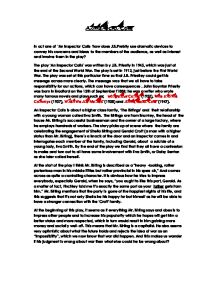 An Inspector Calls In act one of 'An Inspector Calls 'how does J.B.Preistly use dramatic devices to convey his concerns and ideas to the members of the audience, as well as interest and involve them in the play? The play 'An Inspector Calls' was written by J.B. Priestly in 1945, which was just at the end of the Second World War. The play is set in 1912, just before the First World War. The play was set at this particular time so that J.B. Priestley could get his message across more clearly. The message was that we all have to take responsibility for our actions, which can have consequences. John Boynton Priestly was born in Bradford on the 13th of September f1884; he was a writer who wrote many famous novels and plays such as; Dangerous Corner (1932), Time and the Conways (1937), When We Are Married (1938) and An Inspector Calls (1947). An Inspector Calls is about a higher class family, 'The Birlings' and their relationship with a young woman called Eva Smith. The Birlings are from Brumley, the head of the house Mr. Birling is successful businessman and the owner of a large factory, where he employs hundreds of workers. The story picks up at scene where the family are celebrating the engagement of Sheila Birling and Gerald Croft (a man with a higher status than Mr. Birling), there's a knock at the door and an Inspector comes in and interrogates each member of the family, including Gerald, about a suicide of a young lady, Eva Smith. By the end of the play we find that they all have a confession to make and turn out to all have some involvement with Eva Smith, or Daisy Renton as she later called herself. At the start of the play I think Mr. Birling is described as a "heavy-looking, rather portentous man in his middle fifties but rather provincial in his speech," And comes across as quite a controlling character. ...read more.

Birling's children. At the beginning of the play Sheila comes across as a bit childish and immature and maybe still relies on her mum and dad a lot when she say, " yes, go on, mummy. You must drink our health." We get an impression of Sheila as being naive and shallow, but her comment, "last summer, when you never came near me," which refers to Gerald, may suggest to us that she isn't as stupid as she may seem. Eric seems a bit more mischievous and much more naive than Sheila, in the way he talks and how he acts. He seems embarrassed and nervous, as soon as he is mentioned in the play, as it says, "Eric suddenly guffaws," and then doesn't tell the other characters why he came out with it, which suggests he is nervous about something, which we later find out that it is the money he recently stole from his father, Mr. Birling. hI think Mr and Mrs. Birling are more ashamed of Eric and careful that he doesn't do anything stupid to embarrass the family, but the family seem to get on with each other quite well, although you get the impression that there is some tension between Eric and Mr. Birling, when Gerald, Mr. Birling and Eric are talking about women's love of clothes before the Inspector arrives. Sheila also has a link with Eva, who was employed at 'Milwards,' because Sheila thought Eva, was laughing at her when she tried on a dress that didn't suit her. Eva was prettier than Sheila and the dress suited her more, which made Sheila irritated and envious of Eva, so she was guilty of a deadly sin, which was envy. Eric's link with Eva was that he met her in the palace bar one thing lead to another and he got her pregnant, which made him guilty of lust towards Eva. ...read more.

So he should have learnt that if he carries on like that, then it will have consequences like it did have for Eva Smith. In this essay I have discussed the different characters and their behaviour at the start of the play and how that contrasts to their attitude at the end of the play. I have also talked about the morals in the play and how the idea of dramatic irony is explored through the character of Mr. Birling. I have found out that once the characters find out that the Inspector wasn't real, Mr and Mrs. Birling automatically tried to reject the idea that a girl has died as a result of their actions towards her, whereas the younger characters in the play feel guilty and have been affected greatly by what went on. They also feel ashamed and in disbelief at how their parents seem to not care that much and how selfish they turn out to be. We are introduced to the characters through the theme of Sheila and Gerald's engagement party, which contrasts to what the evening had in store for them. The play makes it clear at the beginning about the hierarchy and who has most power, which is Gerald. So we can then see how Mr. Birling tries to impress him. I think the audience is prepared for the idea that the Inspector isn't real by giving us clues, especially when we see that the Inspector is called 'Inspector Goole', which sounds like ghoul, which means ghost. I don't think the audience is prepared for the phone call at the end of the play from the police station, about a girl who has committed suicide; this is an unexpected twist in the play. I think Mr and Mrs. Birling would have the most to fear from the 'real' Inspector's visit because they know they will lose everything, whereas Sheila and Eric have nothing to fear because they have already admitted their wrongs, and will change. And although the Inspector may not have been real, the situation was. ...read more.